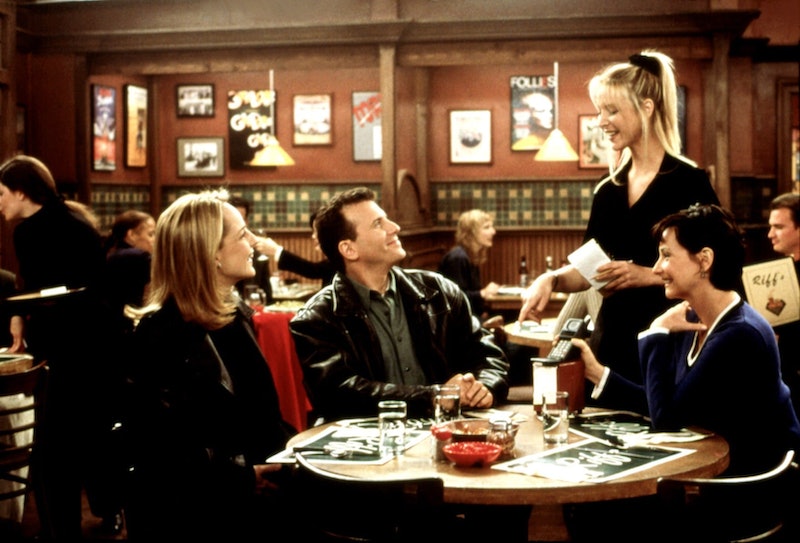 In what was potentially one of the best pop culture crossovers ever, Lisa Kudrow played Ursula Phoebe Buffay on both Mad About You and Friends. Both sitcoms eventually became two of the most popular shows on NBC's Thursday night "Must See TV" during the '90s, and now that one of those shows is back, it's possible that Kudrow will appear in the Mad About You revival to reprise her role. However, nothing has been confirmed and it's probably better if fans don't get their hopes up.

According to TV Line, there are no plans to incorporate Ursula into the reboot, and given that the 12 new episodes are dropping in two batches on November 20 and December 18 respectively, that's unlikely to change, unfortunately. That being said, Mad About You star Paul Reiser did mention in September 2019 interview with TV Insider that "maybe" Kudrow would return and that they "haven't figured it all out yet," so her return shouldn't be ruled out completely.

Of course, it's unclear how Ursula would fit into the revival. The new Mad About You will catch up with Paul (Reiser) and Jamie (Helen Hunt) two decades after we left them in the original show's finale in 1999 as their daughter Mabel (Abby Quinn) moves out to begin attending NYU.

While they still live in the same apartment as they did back during the first run and potentially even visit the same stores and restaurants, it's unlikely that Ursula would still be working there, especially since the final episode of Mad About You revealed that Ursula would go on to become governor of New York in the future.

Unless the Buchmans have ventured into the world of politics or Ursula's political career has gone terribly wrong, the chances of their worlds colliding in 2019 are pretty slim. Then again, things always go wrong when it comes to politics and it would be pretty epic to find a way to bring the scattered-brained waitress at Riff's back.

The first time around, Ursula was written into both shows for a practical reason. Kudrow explained to Comedy Central UK that she had taken the Mad About You role before she knew she had Friends or that it would be such a hit. When the shows were scheduled back to back they had to come up with a quick fix.

Kudrow said: "When Friends got its time slot on Thursday night at 8.30, after Mad About You, everybody realized, 'We need some explanation for the audience — why are they seeing the same girl with the same voice at 8 o clock and 8.30 on two different shows?" And thus, Phoebe Buffay's quirky twin was born.

So while there may not be any logical reason to bring Ursula back in the reboot, here's to hoping at least one cameo is in the works.