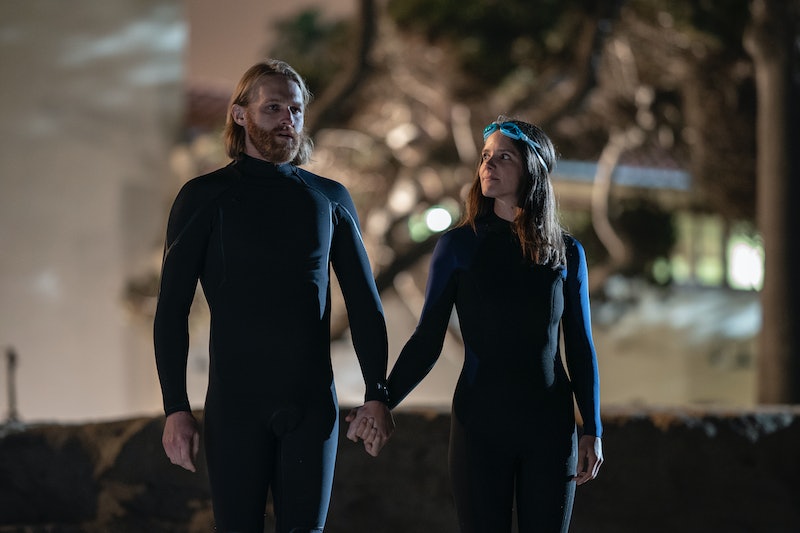 After a lightning strike on his shovel renders Dud (Wyatt Russell) unconscious, he swiftly sinks down into the muddy hole he'd been digging just moments prior, all but burying him alive. A few moments later, he falls from the second story of the Lodge, leaving viewers wondering what on earth happened to Dud and whether all will be explained if Lodge 49 returns for a third season.

While AMC has yet to confirm future episodes, the Season 2 cliffhanger suggests that there could be a whole lot more to discover about the Lodge — and Dud — if the show is to continue. Series creator Jim Gavin is certainly operating as if it will, revealing in an interview with Newsweek that he and fellow showrunner Peter Ocko have been are thinking long-term when it comes to storylines.

"We're kicking Dud forward, into a new chapter," Gavin hinted. "Our first season was our water season, our second was our fire season and the third season is our earth season. So we see Dud kind of enter, transition into this next element."

Gavin admitted that while the fantastical elements of Lodge 49 might allow for a certain amount of winging it, everything that's happened on the show so far has actually been deeply thought out and envisioned long before it ever aired on screen.

"There's absolutely a giant vision board. It's not something we're improvising on and hoping we can tie up," Gavin said. "That being said, we're letting the characters guide those stories in directions we didn't expect. We set out to understand the mythology of our show before we wrote it. But it's important we're not just taking people on a jazz improvisation ramble. There is a method to the madness."

Gavin's forward-thinking approach to Lodge 49 makes it seem as though a third season is all but guaranteed, though Ocko admitted that if the show were to be canceled, he would like the opportunity to plan a deliberate end rather than continuing on without a final destination in mind.

"I think the honest truth is that Jim and I would rather be writing a story that comes to an end, rather than crossing our fingers it never ends," he explained.

It was about this time last year when AMC renewed Lodge 49 for Season 2, so if the network follows the same pattern this year, there could be an official announcement in the next week or two. Given that past seasons premiered in the month of August, that still gives plenty of time for things to get rolling on a new batch of episodes if they aren't already in process.

If Gavin's and Ocko's optimism about Lodge 49's future is any indication of AMC's plans for the series, viewers could find out what on earth happened to Dud if Season 3 premieres sometime in August 2020.

Hopefully the network will confirm the renewal as soon as possible, because after that season finale, Lodge 49 has plenty of questions to answer next season.

More like this
Here’s Why Danny Masterson’s Hyde Isn’t In 'That '90s Show'
By Brad Witter
Everything To Know About The 'Daisy Jones & The Six' TV Series
By Maxine Harrison and Brad Witter
'The Last Of Us' Has Officially Been Renewed For Season 2
By Darshita Goyal
Here’s What Happens To Bill & Frank In 'The Last Of Us' Video Game
By Brad Witter
Get Even More From Bustle — Sign Up For The Newsletter
From hair trends to relationship advice, our daily newsletter has everything you need to sound like a person who’s on TikTok, even if you aren’t.