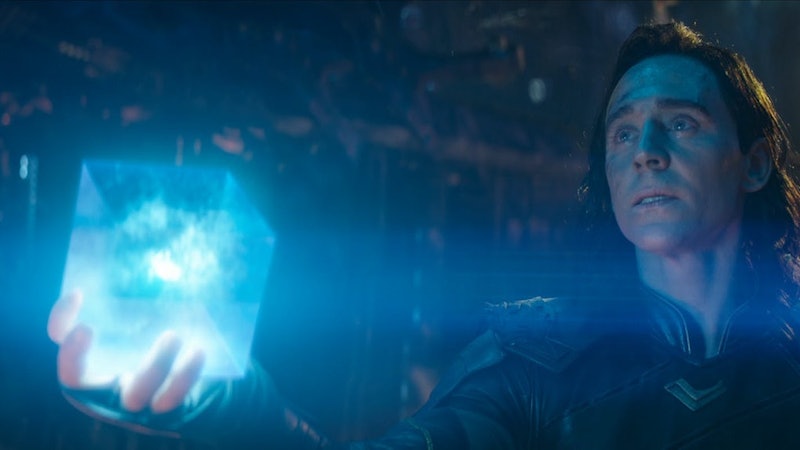 The God of Mischief Loki, played by Tom Hiddleston, has long been a fan favorite in the Marvel Cinematic Universe. Thor's brother, one-time bad guy, and still untrustworthy Frost Giant-turned-Asgardian has grown as a villain we love, hate, or both since his first appearance in Thor. In his time, he's gone good, gone bad again, and maybe gone good once more, solidifying his journey as one of the most interesting character arcs in the MCU. The next Avengers movie comes to theaters on April 26, but will the trickster be back too? Fans can't be sure that Loki will be in Endgame, because of how his Infinity War storyline played out. Spoilers ahead, of course.

Loki's fate in Avengers: Endgame is unlike that of any of the other characters we lost in that movie. While Thanos's snap dusted away half of the population of the universe, Loki was actually physically killed by Thanos. Early in the film, Thanos intercepts Loki and Thor's ship full of Asgardians heading to Earth after the events of Thor: Ragnarok. Thanos forces Loki to give him the Tesseract, a.k.a. the Space Stone, and then snaps his neck right in front of Thor. Thanos then blows their ship apart before Thor can even really confirm that his brother is dead. There's even a moment later in the film when, while talking to Rocket Racoon, Thor says, "He's been dead before. But this time, I think it might actually be true."

So is Loki dead or isn't he? There's only one thing we know for sure about Loki, and that is we can't always trust what we see or what he does. Loki has switched sides so many times throughout the various MCU movies, and he's faked his own death a number of times, so even Thanos snapping his neck doesn't provide a definite answer. So Loki could technically show up in Endgame, and not just at the end when everyone who was dusted (hopefully) comes back to life.

So how could Loki be alive? There are a couple of theories floating around. For one thing, Loki has the ability to create holograms of himself, so there's the possibility that the Loki that Thanos killed was simply a hologram of the God of Mischief. (Though, the fact that he could be touched seems to debunk this theory.) There's also the fact that Loki was holding the Space Stone during the same encounter. The Space Stone has the ability to transport its holder across vast distances of space in the blink of an eye. So without anyone even seeing, Loki could have created a hologram of himself while simultaneously whisking himself away to Earth.

Loki's last words to Thor are a big hint, too. He says, "The sun will shine on us again, brother," which some fans have come to believe means, essentially, "Meet me on Earth." Meaning that Loki could have been on Earth the entire rest of Infinity War, which is certainly also a tad suspect. If he has been there, what's he been doing the whole time? And did he survive the snap?

There are also the more real-world elements of Avengers: Endgame and the MCU in general to take into consideration. On one hand, Tom Hiddleston is not listed in the cast on Endgame's IMDB page, though that isn't necessarily a confirmation the he won't appear, in fact some now-deleted leaked set photos reportedly reveal Hiddleston back in action recreating the Battle of New York with other cast members. So even if Loki is dead, we may see a flashback version of Loki in Endgame.

Additionally, Disney recently announced a handful of limited series for the new streaming platform Disney+, which feature characters that are supposedly "dead." One, called WandaVision, centers around cute couple Scarlet Witch and Vision, who both died in Infinity War, Vision at the hands of Thanos, and Scarlet Witch through the dusting snap. Another called Falcon & Winter Solder will center Bucky and Sam. And the series titled Loki will star Hiddleston himself.

So while we can't be sure if Loki is really dead, or if any version of him will appear in Endgame, Infinity War thankfully wasn't the last we'll see of Loki with Hiddleston in the role.