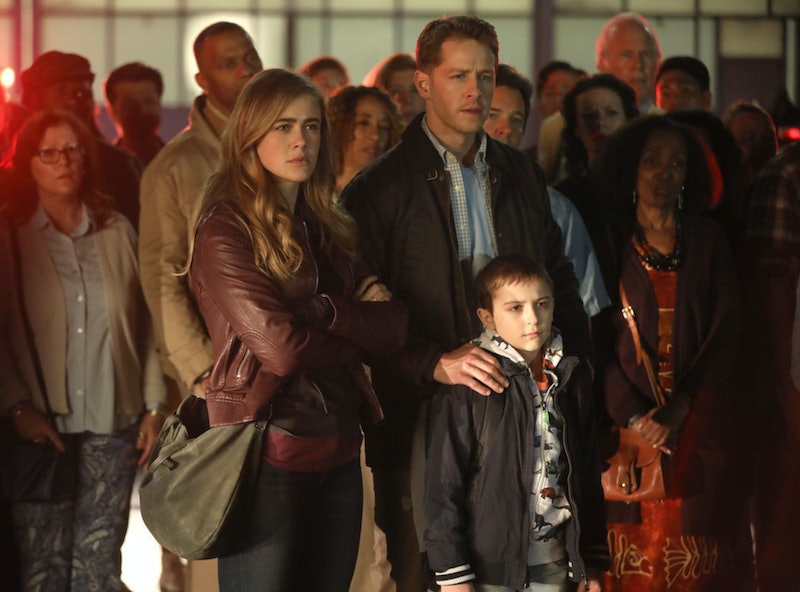 Spoilers for Manifest Season 1, Episode 1 ahead. When Lost debuted way back in 2004, it was a TV game-changer. The pilot picked up just after Oceanic Airlines Flight 815 crashed onto a mysterious, not-so-deserted island, sending the plane's passengers into a six-season rollercoaster of twists and turns. Now, a new show is promising the same mystery-packed intrigue, but with a fresh perspective — which is exactly why Lost fans will like Manifest. It's not a carbon copy, but rather a new, if similar, model.

The comparisons between Manifest and Lost were bound to happen from the get-go. Both involve fantastical, sci-fi-adjacent mysteries that connect the lives of strangers who happened to be on the same plane. In Manifest's premiere episode, passengers of Montego Airways Flight 828 touch down safely in New York after what seems like a few hours in the air. They encounter a patch of severe turbulence in the middle of the trip, but otherwise, nothing seems off.

That sense of normalcy, however, is swiftly disrupted after authorities meet the plane on the tarmac and deliver some chilling news: The crew and passengers took off on April 7, 2013, and it's now Nov. 4, 2018.

That's right — more than five years have passed since the plane went missing, and those aboard have long been presumed dead. The situation should be impossible: None of the passengers have aged a day, they don't remember anything more than a routine, if bumpy, flight, and the jet never ran out of fuel. And yet, there they are, smack in the middle of an inexplicable, logic-defying predicament.

From that startling revelation, similarities to Lost only build. Using numbers to hint at the show's endgame was part of Lost's bread and butter, and Manifest follows their lead. Case in point: Flight 828 passenger Michaela (Melissa Roxburgh) notices Psalm 8:28 embroidered on a pillow at her family home, and later, helps her detective ex-fiancé make a break in his case while at a home with the street number 828.

There are also nods to spirituality and the ideas of destiny and fate — something else that was integral to the structure of Lost's narrative. Cal (Jack Messina), a young boy who was on the plane, was previously given six months to live after a bleak cancer diagnosis. But after five years in a miraculously unchanged body, he returns from flight 828 able to enter a new, potentially life-saving trial. Moreover, the scientist whose research led to the trial was a fellow passenger. Lost often asserted that Oceanic 815's passengers were supposed to meet each other, and that appears to ring true for Manifest's survivors, too.

Perhaps the most important way Manifest calls back to Lost, though, is through its storytelling. It has the same proclivity for big reveals, yes, but also pulls at viewers' heartstrings ― something few sci-fi shows have pulled off as deftly as Lost. After the passengers leave the airport, they discover that life has gone on without them: Children have aged, parents have died, lovers have moved on. Watching the passengers come to terms with this news is genuinely moving and often devastating, confirming that Manifest is like Lost in one huge, overarching way: In its debut episode, at least, it cares far more about the humanity of its characters than it does about any larger mysteries at work.

Lost got a lot of flack for its later seasons, some of which is fair, but criticisms about its bloated plot lines overlook one fact: Lost was never in the business of tying up every loose end. The minutiae of the show's enigmatic, series-long puzzle was never the point ― the people within it, who were dealing with loss, love, and extraordinary circumstances, were what made the show so impactful.

Despite these similarities, Manifest is not just Lost reincarnated. There are stylistic differences: Narration helps to flesh out the story, and thus far, there are no flashbacks. Plus, the show is quick to introduce a sense of purpose. Whereas Lost left its characters to unravel the island's secrets rather aimlessly, Manifest sets its intention early on. After they land, the flight's survivors begin to hear psychic voices in their heads that help them to prevent accidents and save lives. This suggests they're destined to use these powers to make the world a better place ― which is also more optimistic than Lost's sometimes-dark thematics. And, lastly, Manifest's mysteries feel more focused. Yes, the plane's timeline is quite the head-scratcher, but there aren't any subplots filled with polar bears and secret hatches ― at least just yet.

If you were captivated by Lost's larger-than-life plot, attention to detail, and affecting characters, Manifest is an apt show to fill the void. It's too soon to tell if the new drama will continue on the path it set for itself in the pilot, but the foundation is there, and the takeoff has, so far, been smooth.