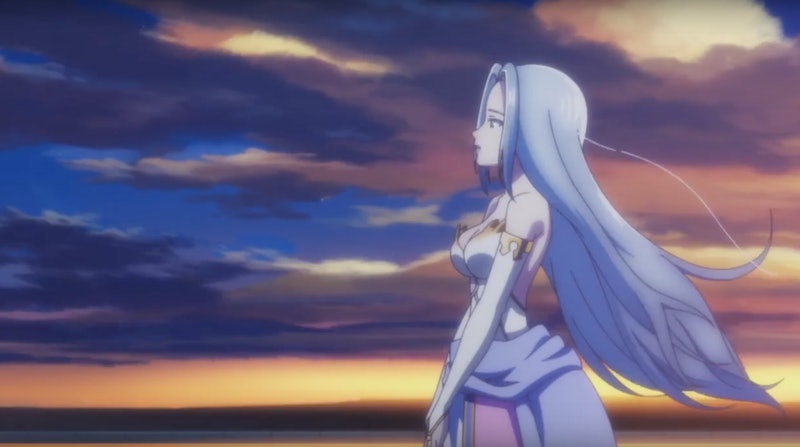 On March 31, Netflix debuted musical anime series Lost Song, and new episodes were available to stream every Saturday. The catch? It was only available in Japan. Now, it's headed to a worldwide audience with a global release date of Oct. 5, but given that Japanese viewers have already had over six months to obsess over the show, there are probably more than a few people wondering if Lost Song will return for Season 2. Right now, it's looking very likely, but Netflix seems to be focusing on launching the show internationally before making anything official.

According to the streaming service's website, the show follows Rin, "an energetic girl who loves to eat" and "lives in a verdant frontier village." Little does she know, she shares a special power with only one other individual, Finis, who lives far away in the capital city. That special shared power is the power of song. It heals wounds, creates water, and stirs the wind. As war continues to ravage their kingdom, destiny brings Rin and Finis together, and they must embark on an adverse journey to save their people guided by the thing that binds them — their voices.

So, not only is Lost Song another marathon-worthy musical that any show tune-lover should add to their watch list, it's a badass story of two women working together to share their powers for good. And while there are struggles along the way, it looks like there could be a sweet ending ahead of them. (Check out the English version of a trailer for the show below).

As Lost Song finally begins to make its way to a global audience, the series' team has hinted they may have a few surprises up their sleeves. Following its Netflix debut, the show aired on several Japanese channels, and a follow-up commercial after the Season 1 finale revealed that it will be getting a mysterious "new project," according to Anime News Network. The Lost Song creators proceeded to tease said project on Twitter, tweeting artwork in September that depicts Rin and Finis — one holding a baby. The picture is captioned with the words, "To Be Continued." So, while Netflix has yet to officially confirm a renewal, the concepts of "new project" and "to be continued" seem like a pretty promising sign that we'll be seeing more Lost Song in the future.

In the meantime, longtime fans who are also gamers can cling to another new release to keep their excitement at bay. Gaming websites PC Gamer and Gamer Revolution have announced that a Lost Song video game called Sword Art Online: Lost Song is in the making. The crossover role-playing game, which marries Lost Song and fellow anime series Sword Art Online, already exists for PlaySation 3, but will now be released in PC format. However, publisher Bandai Namco has yet to announce a release date for the new version. So, keep an eye out for that, as well as an official renewal for Season 2. Fingers crossed!

More like this
Nicola Coughlan Shared A Lady Whistledown Excerpt From ‘Bridgerton’ Season 3
By Grace Wehniainen, Alyssa Lapid and Sam Ramsden
The 'Heartstopper' Cast Were Spotted Filming In A Major City
By Nola Ojomu and Sam Ramsden
'Elite' Season 6 Is Arriving Sooner Than You Think
By Gretchen Smail and Grace Wehniainen
The ‘You’ Season 4 First Look Shows Joe’s New Identity And Potential Victims
By Bustle Editors
Get Even More From Bustle — Sign Up For The Newsletter