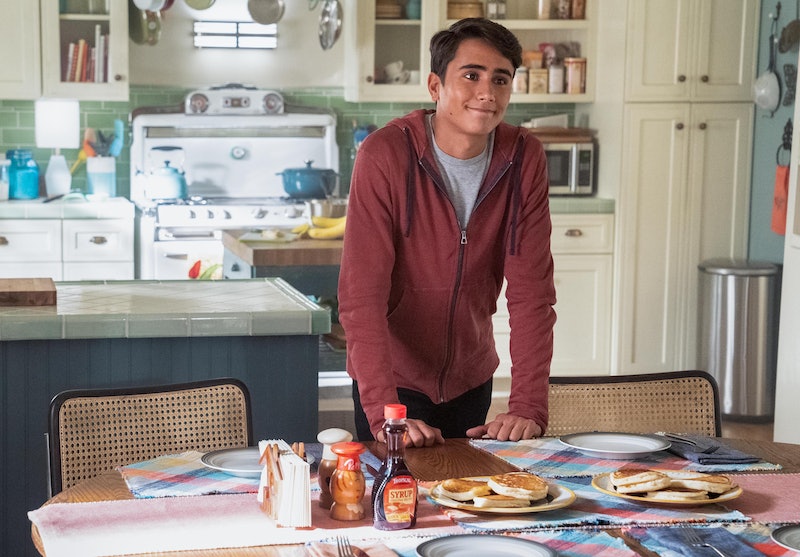 Spoilers ahead for the Love, Victor finale. Love, Victor ends with a pretty major cliffhanger, so fans who rush through the season's 10 episodes will definitely want to know what happens next. Good thing Love, Victor Season 2 looks like it's a go. Hulu has not officially announced a renewal for the series, but Entertainment Weekly reported that "a writer's room has already been assembled for Season 2," which makes the show's return seem pretty likely.

The end of the first season gives the writers a lot to work with for future episodes. Victor's parents announced that they're separating, there's going to be fallout from Victor lying to Mia, and there's potential for Victor and Benji's relationship. But most notably, Victor came out to his parents in the final moments of the last episode. Viewers didn't get to see how his conservative parents reacted, so that will definitely be something for a second season to explore.

According to Variety, the first season filmed in August 2019 for a June 2020 premiere. It's possible that Hulu will aim for another Pride Month tie-in for the Season 2 premiere in 2021, but that likely depends on when filming can start back up again. If production can't start this August (given the effects of the novel coronavirus), there may be a slight delay before more episodes can hit Hulu.

But Love, Victor actor Michael Cimino wants viewers to use this time to check in with themselves. Good Morning America asked him what he wants fans to take away from the series in the time between Season 1 and 2 and he replied, "I hope that this show inspires people to be who they are authentically and with no regrets. I think that's really what this show is about."

Additionally, there's plenty of content fans can consume in the interim. Because Love, Victor is a spinoff of the Love, Simon movie, fans can always rewatch the film while they wait for more Love, Victor. And since Love, Simon was based on the book Simon Vs. The Homosapien Agenda that's definitely worth a read in this downtime.

Author Becky Albertalli has also written two other books that live in the same universe. The Upside of Unrequited is about Simon's friend Abby Suso's cousin Molly, and Leah On the Offbeat gives Simon's best friend Leah her own story. On June 30, Albertalli will also release a novella called Love, Creekwood, which takes place after the events of Simon Vs. The Homosapien Agenda and Leah On the Offbeat. The characters are now away at college but keep in touch via the emails compiled in the novella.

With likely a year or more to wait before more Love, Victor episodes, there's so much fans can do to tide themselves over. But Cimino's suggestion about using this time to lean into being their authentic selves is one of the best.

More like this
Everything To Know About 'Only Murders In The Building' Season 3
By Gretchen Smail and Kadin Burnett
Pamela Anderson's Sons Brandon & Dylan Have Their Own Hollywood Careers
By Arya Roshanian
Wait, Is Barney Stinson Related To Sophie On 'HIMYF'?
By Gretchen Smail
Pamela Anderson’s Dating & Marriage History Could Be Its Own TV Series
By Jake Viswanath
Get Even More From Bustle — Sign Up For The Newsletter
From hair trends to relationship advice, our daily newsletter has everything you need to sound like a person who’s on TikTok, even if you aren’t.