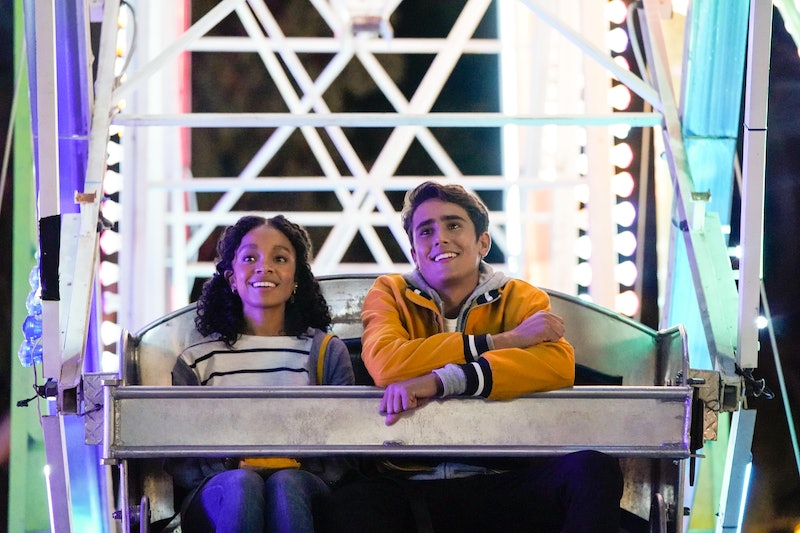 It's not easy to figure out how to enter the world of dating, let alone who you're attracted to or your sexuality, and Victor is learning that the hard way. Hulu's Love, Victor will follow Victor's journey as he pledges to figure out what he wants and doesn't want in a high school love, all while writing letters to Simon, connecting the show to the hit film Love, Simon. In fact, this Love, Victor trailer teases the return of a Love, Simon fan favorite.

Love, Victor takes place at the same high school as Love, Simon, and in the same universe, but instead of being about Simon's journey to coming out, it's focused on Victor, a 16-year-old new kid who opens up in letters to Simon (presented via voice over). Other than the familiar settings (and that killer high school carnival), there doesn't appear to be much overlap between Love, Simon and Love, Victor, except for one thing: Keiynan Lonsdale. The actor, who played Simon's love interest Bram in the film, makes a small cameo in the trailer. It's a short appearance, but one that will no doubt have fans waiting to see if any other Love, Simon characters will show up in the new series.

Of course, Simon himself, Nick Robinson, will be a part of the show, but he's only listed as the "Narrator" on IMDB, though fingers crossed he'll show up to give Victor some much needed guidance. Though, it's clear from the trailer that Victor is dealing with an entirely different set of issues than Simon was in terms of his sexuality. "You're very lucky, Simon, for having the world's most perfect, accepting parents, supportive friends," Victor says in the trailer. As the new kid in school, Victor doesn't have a strong support system around him yet, and his Latinx family seems more traditional than Simon's, and a bit bigger.

Love, Victor might be modeled after Love, Simon, but Victor's story will be all his own. That said, if a few other familiar faces want to pop in, we won't complain.

More like this
Everything To Know About 'Only Murders In The Building' Season 3
By Gretchen Smail and Kadin Burnett
Adam Ali Hopes 'Waterloo Road' Will “Subvert” Queer Misconceptions
By Sam Ramsden
Wait, Is Barney Stinson Related To Sophie On 'HIMYF'?
By Gretchen Smail
Ozzie’s Coming Out Scene With Kitty On 'That ’90s Show' Has Twitter Sobbing
By Brad Witter
Get Even More From Bustle — Sign Up For The Newsletter
From hair trends to relationship advice, our daily newsletter has everything you need to sound like a person who’s on TikTok, even if you aren’t.