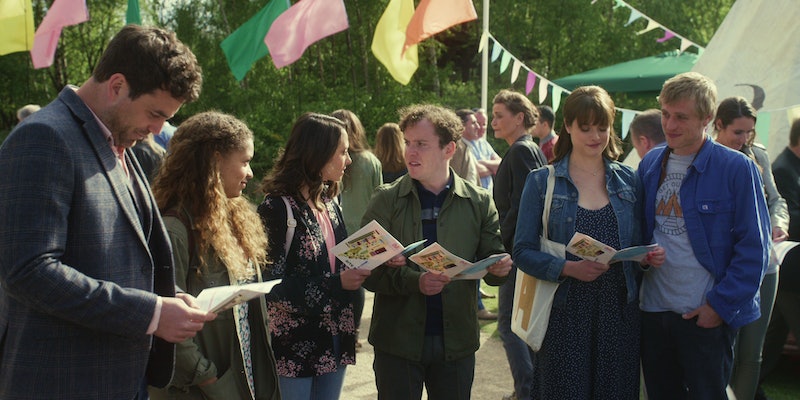 Once upon a time, Netflix's Lovesick was a show called Scrotal Recall, subject to endless teasing from Netflix users because people are immature and cruel to the point of sleeping on one of the most sweetly romantic television shows of the past five years. Fortunately, the British series keeps coming back for more despite the initial reaction to the anatomy-based pun. Season 3 will drop on Jan. 1, 2018, just in time to nurse your post-holidays blues (or hangover) and Lovesick Season 4 is not entirely out of the question either.

As a fan, it's sort of difficult to tell whether or not this series will be renewed — Netflix is infamously lowkey about it. Season 3 was announced in March, but they haven't done much promotion. So just hold tight and enjoy the new episodes when and while we have them.

If you're looking for clues that the third season might be the last, the fact that Antonia Thomas (Evie) is starring in the wildly popular American series The Good Doctor, Daniel Ings (Luke) shows up as Prince Philip's best bro and a bad dad on The Crown, and Johnny Flynn (Dylan) stars as Einstein on Genius is not exactly promising. The Lovesick cast is busy with other projects, and while filming a fourth season might not be impossible, it could become tricky to schedule.

Also, fellow Lovesick heads, spread the word! More folks need to get on board, and if you haven't watched this series yet, stop wasting time. Thanks to the gift that is British television, it would take a person approximately seven hours to catch up on Seasons 1 and 2 — and you won't want to put it down once you start. The show is funny, sex-positive, relatable, charming, and will gut punch you right in the feels when you least expect it. What started as a comedy about a guy named Dylan ,who has to contact his previous sexual partners after contracting chlamydia, has become a millennial How I Met Your Mother about a group of friends and the tangled web they've woven over a short span of struggle-filled years.

According to the official description from Netflix, "the third installment picks up with Dylan, Evie, and Luke still trying to navigate their way through their love lives, in a 'warts and all' take on twenty-something romance." Both Angus and Abigail will be back this time around. Also, in Season 3, "Evie must come to terms with her feelings for Dylan, just as his relationship with Abigail gets more serious. Meanwhile, Luke struggles in his new quest for love and Angus faces the reality of marrying someone he barely knows. Across the series, the gang try their best to make sense of their love lives by looking forwards, backwards and... sideways."

"Sideways" — what does that mean?! Is this a final season of Lost situation? Are the characters going to start dipping into alternate universes? Because that would be wild, even though it makes sense. Season 3 ended with Angus getting engaged on a whim, Evie admitting her feelings for Dylan to Luke, and Dylan doubling down in his commitment to Abigail. It's kind of a melancholy ending, especially for those 'shipping Evie and Dylan, and situations like that always leave you wondering "what if" about the romantic paths you've taken (or purposely avoided) in life.

Netflix may not shout it from the rooftops, but there's definitely something they like about this scrappy, doe-eyed show. A Season 4 announcement may well be waiting around the corner. Back when it was called Scrotal Recall, the show seemed doomed to be a "one and done" cancelled too soon situation. Someone is crushing hard, even if they won't admit it.