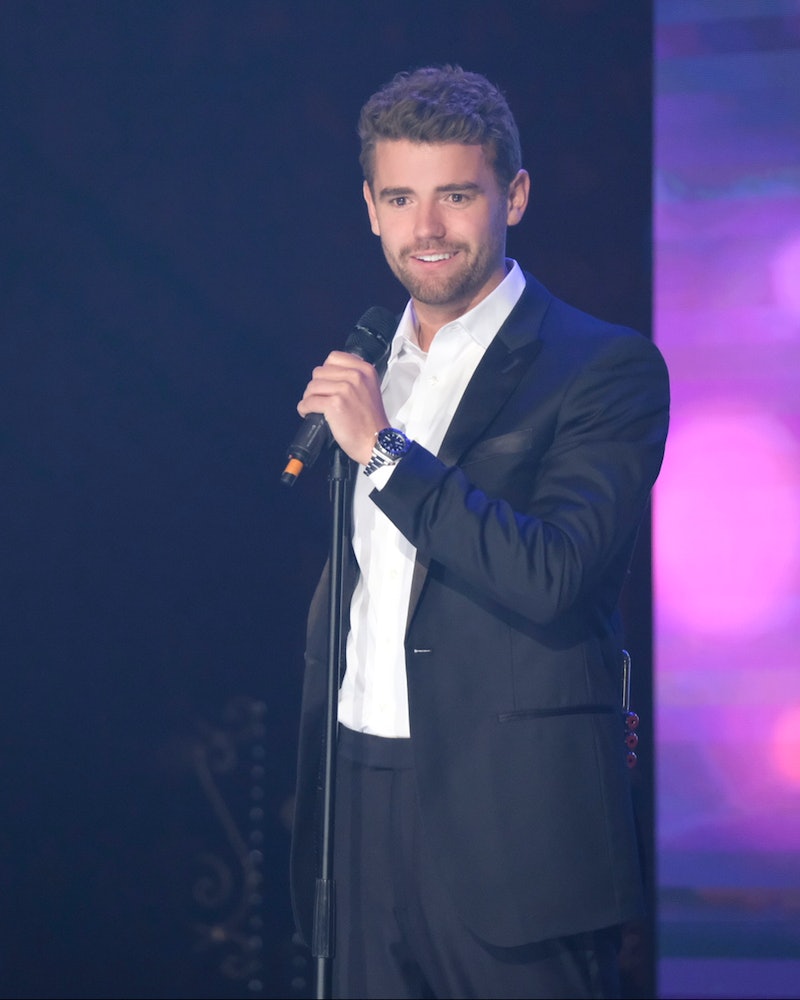 Luke S. is in some hot water when The Bachelorette returns this week, and it's unclear if Hannah's going to keep him around or not. But even if he does get the boot, if Luke S. ends up on Bachelor in Paradise, he might remain in Bachelor Nation. The sandy beaches of Mexico seem like exactly the place his personality could thrive.

Obviously the cast for Bachelor in Paradise hasn't yet been announced — that would kind of spoil Hannah B.'s season. But with Luke S.'s current situation, his future with Hannah is on very shaky ground, and Paradise very well might be his next stop.

Last week's episode ended with Hannah bringing Luke S. and Luke P. aside in order to get to the bottom of their fight. Luke S. thinks that Luke P. is unhinged, and claims that he "body slammed" and "decked" him while the men were playing rugby on a group date. But Luke P. says he was defending himself, and also told Hannah that Luke S. was only on the show to promote his tequila line. So what is the truth? We may never know, but here are all the reasons we could very well see Luke S. on Bachelor In Paradise this summer.

He's Stood Out This Season

Before all this hubbub with Luke P. happened, Luke S. wasn't exactly hiding in the background. He wasn't one of those guys whose name we still didn't know after two episodes — he was always pretty front and center. That has a lot to do with how producers and editors decided to frame the show, but he was obviously always a contender for one reason or another.

He Isn't Afraid Of Confrontation

You don't want a dude who can't stop fighting with other guys (looking at you, Luke P.), but it is good that Luke S. is game to stand up for himself and his relationships when it's appropriate. Plus, it makes for good TV, and that's what Bachelor casting directors will want.

Reality television personalities can be deceptive, but Luke S. has always come off as fairly genuine and ready to find a meaningful relationship. Even if it doesn't happen with Hannah, it seems like he could easily make a connection in a larger group of people.

Fans Are Already Rooting For Him

Fans are so against Luke P. that it's won Luke S. some favor in the process. Luke P. has been telling Hannah that Luke S. is here to promote something, but viewers haven't heard a word about this supposed tequila company. It feels like Luke S. is getting the short end of the stick, and Paradise is where fans will want to see him get redemption if Hannah does send him home over this.

He's Game To Be A Little Silly

No one likes a guy who takes himself too seriously, especially in a party atmosphere like Paradise. As evidenced by his time on the show, and the ridiculous photograph above, he's game to have fun. Isn't that what Paradise is all about?

There's always the possibility that Luke P. and Luke S. both end up on Paradise, and we get a second wind of drama. Most people would rather never see Luke P. on their screens again, but if it'd make for good TV, it'll probably happen. Until then, ready your popcorn for Tuesday night, because one of them is likely going home no matter what.