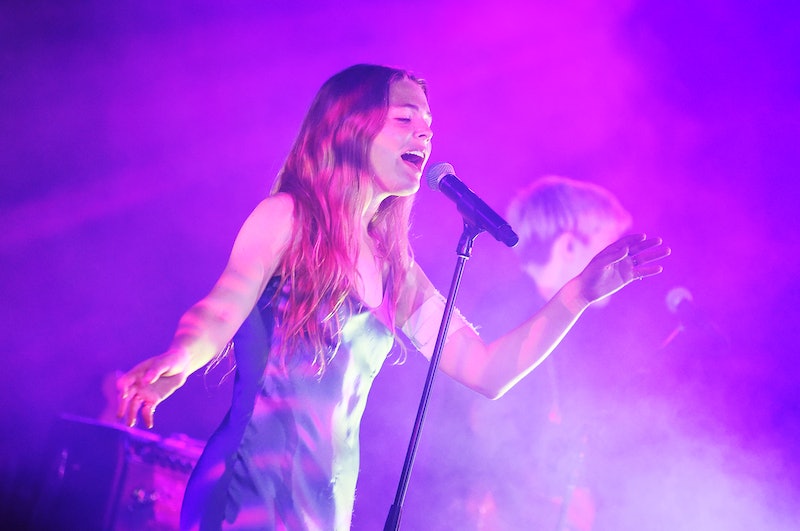 Singer-songwriter Maggie Rogers burst onto the music scene following a viral video and the release of her major-label debut album Heard It in a Past Life. The 25 year-old took the U.S. album charts by storm and reached the top five of the Billboard 200 back in January 2019. Her music has been met with glowing reviews from both fans and critics, but will Maggie Rogers tour the UK? Well, the "Light On" singer is on her way to the UK, and here are all the important details you need.

According to the singer's official website, Rogers is scheduled to perform at the Belsonic Festival in Belfast on Thursday, June 27. At the festival, the singer will perform during Hozier's set, and will be joined by Scottish musician, David Keenan. Maggie is then pencilled in to perform at the iconic Glastonbury Festival on Friday, June 28. Rogers last UK stop of the summer will be at the 2019 Barn on the Farm Festival, which takes place between Thursday, July 4 and Sunday, July 7.

Tickets are available to purchase via the singer's official website, however with the exception of the Belsonic Festival, all UK events are currently listed as being sold out.

According to NME, this will not be Rogers' first appearance at the legendary festival, and back in 2017, the U.S. indie star performed a Glastonbury set in the famous John Peel tent — during which she covered the Spice Girls pop classic, "Wannabe." Prior to her festival days, Rogers was a student at New York University's Institute of Recorded Music, which became the setting of a viral video that went on to kick-start the singer's career. As reported by the BBC, superstar Pharrell Williams hosted a special masterclass for NYU students during a video for iamOTHER. In the viral clip, the "Happy" singer stopped by to hear some of the students best work, and after being blown away by Maggie's electro-folk track "Alaska," Williams declared that he "had zero notes."

The intimate session made serious waves across social media following its release online, and before she knew it, Rogers had hit the road on a tour which took her around the world. When discussing her whirlwind rise to fame, the singer said, "So much happened so quickly. My very private life became public almost overnight, and in this way where I had no control over it. I was really scared and I was really overwhelmed."

As reported by Digital Spy, Rogers will perform at the 2019 Glastonbury Festival alongside the likes of The Killers, The Cure, and Stormzy — each of whom will appear as this year's official Glasto headliners. The famous legends slot will this time be occupied by pop princess Kylie Minogue, which according to the Guardian, will be the Australian's first full set at the UK festival since cancelling her 2005 headline slot due to a breast cancer diagnosis.

This year's batch of Glastonbury tickets have now sold out, however according to the website Glasto Feed, there are still some competitions open which currently offer tickets to the festival as prizes. Good luck.