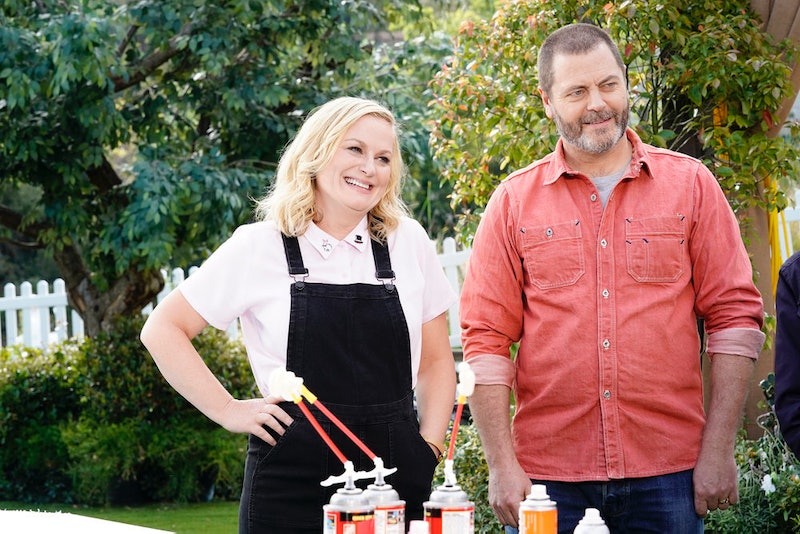 When Making It Season 2 began, hosts Nick Offerman and Amy Poehler made it seem like it almost didn't happen. The opening scene was of them hammering a "for sale" sign in front of the house where the show takes place, only for Poehler to stop and ask, "Nick should we have another [season]?" They did, and the Season 2 holiday event aired over two weeks in December. But when it ends, Making It Season 3 isn't guaranteed.

According to Deadline, Making It was pitched as a television "hug," an answer to all the negativity that can be seen in the world. "We really wanted this show to feel like an antidote to real life," Poehler told Deadline. "The kind of thing that you watch with your kids that would inspire them, and get them to make something, and could kind of be healing in a cruel world." Basically, it's the Great British Baking Show, but with crafts.

That kind of content is still very much needed in today's climate, but it may have to come from somewhere other than more Making It. Aside from Poehler's frequent jokes about how they should just end the series to avoid sending any more contestants home and hurting their feelings, the show isn't performing very well with viewers — especially compared to its previous season. According to TVSeriesFinale, Season 2 is averaging 2.4 million viewers an episode, which is down almost 40 percent from its Season 1 viewership. It's most recent episode was watched by 1.7 million people, making it NBC's lowest rated unscripted show.

NBC was pretty excited about Season 2 when it was initially renewed in August 2018. "Seeing firsthand the imagination of a true craftsman and, literally, watching them create something out of nothing is pure gold," NBC alternate and reality president Paul Telegdy told TV Line. "Amy and Nick's longtime friendship and affection for one another brings the show to a whole other level of fun, and we look forward to seeing what Season 2 will bring."

What Season 2 did end up bringing was much different in format from the original. While Season 1 aired over six weeks, Season 2 has been crammed into just two weeks, with the competition ending just a handful of days after it begun. That's a challenging way to present a show, as many people might not have time to watch four nights a week to keep up. It feels a bit like NBC is just burning the episodes off to move on to other things. But perhaps the network will keep this holiday event series going with a similar format next Christmas — if just to have some new programming on during a traditionally slower time for network television. After all, there will never be a shortage of aspiring creators to cast.

Even if NBC doesn't bring Poehler and Offerman back for another season of Making It, they are in development with the network on other things together. In her interview with Deadline, Poehler said that they've both been working with NBC on future unscripted projects. "They have a strong department that looks for original stuff," she said. "We have some other things that we're trying to develop with them, and it's been a great experience so far."

Poehler and Offerman's chemistry, dating back to their time on Parks and Recreation together, is one of the best parts of Making It. If they can bring that co-hosting magic to another show, at least fans won't be too sad if Making It does get cancelled.