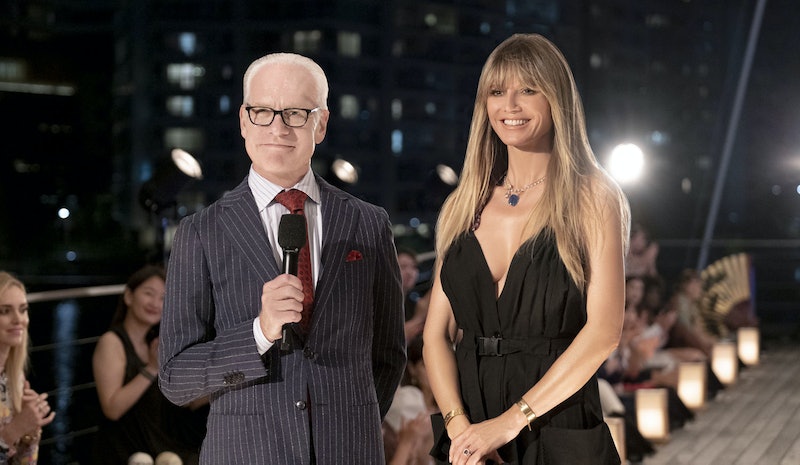 In a move that surprised fans of the long-running fashion reality show Project Runway, former hosts Tim Gunn and Heidi Klum decided to make it work with a whole new show on Amazon, Making The Cut. With the Season 1 finale coming up, many fans are wondering will Making The Cut will return for Season 2?

So far there's no official word on whether the show's been renewed for a second season from Amazon, but that doesn't mean host Heidi Klum isn't hopeful. "I hope that it will have longevity. I hope that these people really are going to make it," she said to The Hollywood Reporter. "We're trying with everything in our power for that to happen." Reviews of the show have been mixed, with USA Today saying it's too similar to Project Runway to garner interest while Runway's still airing, and The Guardian pointing out the poor timing of a sky-high budgeted show focused on luxury design in the middle of a worldwide economic crisis.

One major way that Making The Cut differs from Project Runway is that each week's winning look goes up for sale on the website immediately after an episode airs. The looks have been selling like crazy, with customers mostly complaining they don't even have a chance to buy the clothes, they go so fast.

The show also focuses on design over craftsmanship, with designers leaving patterns and instructions for an invisible group of seamstresses to sew overnight, instead of sewing outfits themselves as on Project Runway. The contestants are also already-established designers instead of Runway's amateurs or newbies. And speaking again to Amazon's global vision for the show, which launched simultaneously across 200 television markets, they represent fashion all over the world, with contestants hailing from Belgium, Milan, and Shanghai. "When we’re looking for a winning look, we’re trying to keep that in mind, like the world is watching," Klum told the AV Club. "Before it was really like only people here were watching. Now it’s people from all over are watching."

While there's no word yet on the future of Making The Cut, if Amazon's planning to pivot to fashion like they did to groceries, Making The Cut is just the first step.

More like this
Everything To Know About 'The Real Housewives Ultimate Girls Trip' Season 4
By Jake Viswanath
Andy Cohen Apologized To Larsa Pippen After A 'RHOM' Season 5 Reunion Dust-Up
By Brad Witter
Love Island’s Latest Winter Season Finally Has A US Release Date
By Grace Wehniainen
Everything To Know About A Potential 'Bling Empire: New York' Season 2
By Gretchen Smail
Get Even More From Bustle — Sign Up For The Newsletter
From hair trends to relationship advice, our daily newsletter has everything you need to sound like a person who’s on TikTok, even if you aren’t.