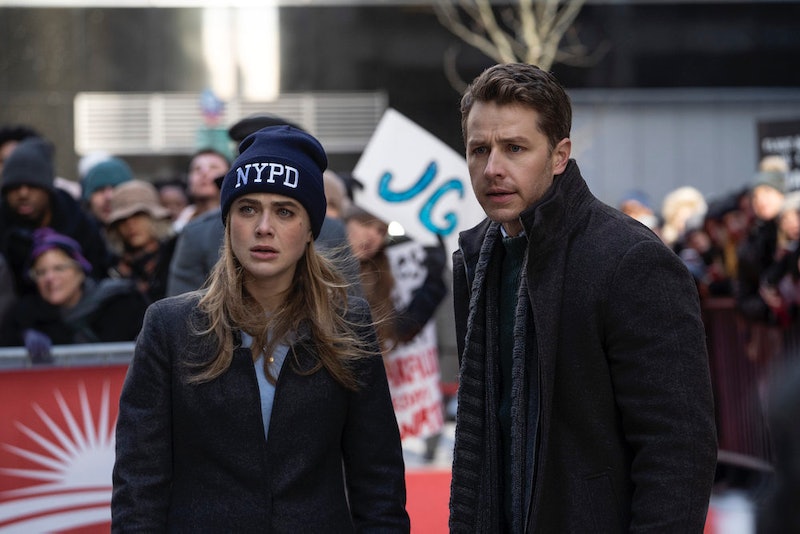 If you were hoping the Manifest finale would provide answers to the approximately one zillion questions fans have, think again. The show's creator Jeff Rake tells Bustle that the finale (which airs on NBC on Feb. 18 at 10 p.m. ET) will have a ton of cliffhangers to resolve if and when Manifest returns for Season 2. Rake says a renewal hasn't been ordered yet, but he's optimistic that the story will be continuing.

"We’re doing well; a lot of people watch the show. The network likes the show; I talk to them all the time. We have a lot of fans at the network," Rake says. "It’s a process and sometimes these things take longer than others but I feel like our track record speaks for itself… and I believe we’ll back."

Rake says that if they get the green light, he and the writers will be ready with new material, because he already knows where he wants to take things. "I’ve had my endgame since I pitched the show, long before we ever came on the air," Rake says. "So the fundamental moves of the series are locked." That being said, Rake is open to story strands that fans may be curious about.

"If there is a character who has garnered a lot of excitement and interest out there in the fan base, that may result in the writers and I wanting to write more towards that character and allowing that character to evolve more than he or she otherwise would," Rake admits. "While I have broad goal posts that I need to hit in the seasons to come in order to get to my ultimate endgame, there’s obviously a lot of wiggle room along the way," he adds, "So there may well be times where some fans out there may throw out a theory that I feel like is worth exploring as a path for one of our characters, even if it ultimately doesn’t speak to where the show is going to land at the series finale."

So if you have a 'ship you want to see or a theory you're curious about, keep on tweeting about them — you never know what may make it on the show. But fan theories aside, the writers have already been making solid Season 2 moves.

"Because I’ve always had the road map that takes me all the way to my ultimate season, that means that, even in our Season 1 conversations in the writers room, we would constantly hit on story strands that we realized made more sense in Season 2 than Season 1," Rake says. "Organically there was already an archive in progress that allowed us to start putting a bunch of place holders on the books in terms of points that we have to hit in Season 2."

Rake says that the Season 2 agenda definitely includes providing answers to the four major cliffhangers that the Season 1 finale leaves fans with. And one other solid story point fans can count on is that Adrian's church will continue to play a role.

"People like Adrian, who are asking the great questions, 'maybe this is why we came back, maybe we are miracles, maybe we deserve to be object of blessings, and maybe it’s our responsibility to assume that role for those who want to believe in us,'" Rake says. "That's going to continue to blow up in Season 2 as more people fold into the ranks of the believers."

And, Rake hints that the finale will also reveal that, for people who use the callings for evil, there are negative consequences to face — so Griffin could be in for trouble now that he selfishly used his calling to escape prison. That could also play into Season 2 if more passengers or other related time-travelers get any nefarious ideas about their own callings.

Season 1 of Manifest premiered in the fall of 2018, which means Season 2 could possibly premiere around the same time in 2019. That means fans would have to wait about seven months to get any cliffhanger answers. But with a story as complex and intriguing as this one — it could be well worth the wait. So now all the show's team and fans need is a renewal to get the ball rolling.