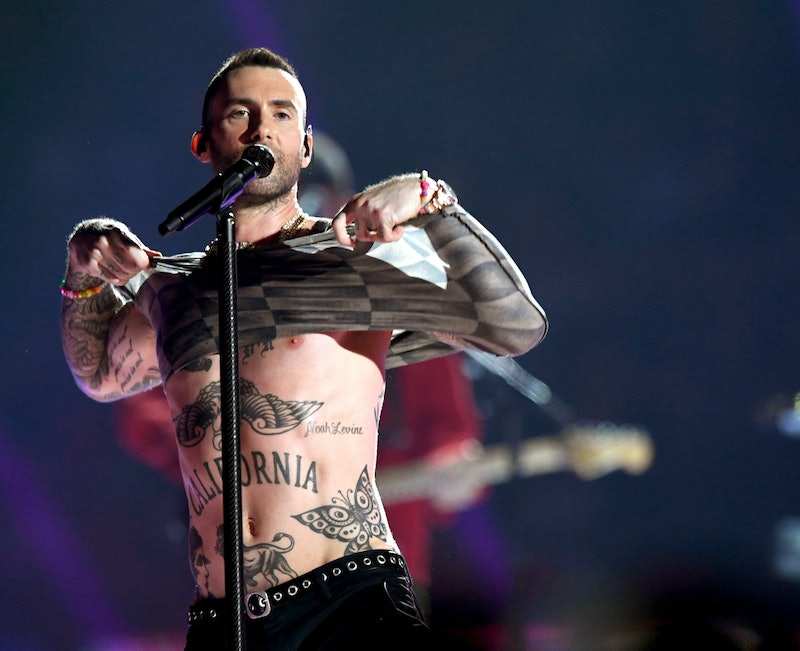 There's been quite a lot of recent commotion in the U.S. over Maroon 5. That's not to say that they haven't always got people talking, but the group seem to have taken over even more conversations after their performance at the Super Bowl. C'mon, don't tell me you haven't seen all those shirtless, tatted-up pics of Adam Levine from that performance? But a picture's only a picture. So, if you're willing to pay a Maroon Fiver to see that tattooed belly in the flesh, then you must be one of the many wondering, will Maroon 5 tour the UK in 2020?

Er, well, unless you fancy a very expensive trip to the Caribbean, it doesn't look as though you'll get to see Maroon 5 anytime soon, according to the band's official tour schedule. On the scarce page, there's only one date listed, and it's for an appearance at Curacao Jazz Festival in the Netherlands Antilles.

However, if you are into the idea of seeing Maroon 5 perform alongside the likes of the Black Eyed Peas, Mariah Carey, and Pitbull on a piece of unspoiled paradise, then you're in luck. Tickets for the festival are still going, and there are travel and stay packages on offer, although I imagine they'll set you back a fair bit.

So, to be honest, it's not looking all that promising so far. But you never know. Maroon 5 may well pull a couple of surprise UK shows out the hat, and I've asked one of the band's reps whether there's any chance of that happening. Hopefully I can come back with some news for you. Stay tuned.

While Maroon 5 haven't done a fully fledged tour of the UK since 2015, according to Setlist.FM, in support of their album fifth album V (yes, they're into their Roman numerals), they did put in a recent performance at Capital FM's Summertime Ball in London on June 6 2019. It was a pretty quick pit stop, though, as the band's relatively short set was sandwiched between sets from the likes of the Jonas Brothers and Rita Ora. So, after four years without a tour, I reckon the nation's pretty deserving of one in 2020.

Just before the band's set at the Summertime Ball, Maroon 5 and Cardi B found out that they'd tied with Ed Sheeran's record for the second-most weeks at No. 1 on the Adult Contemporary chart, with Sheeran's 'Shape Of You,' and Maroon 5 & Cardi B's 'Girls Like You' both remaining there for 24 weeks, as Forbes reported on Friday, June 7. So you know that they really brought the party to the UK after earning that distinction.

Here's hoping that they'll do the same again soon. Having been in the mainstream for well over 15 years now, and still managing to get up to the top of the charts, you can count on a hit-heavy show from Maroon 5. Let's hope that you can also count on them to bring it to the UK sometime soon.