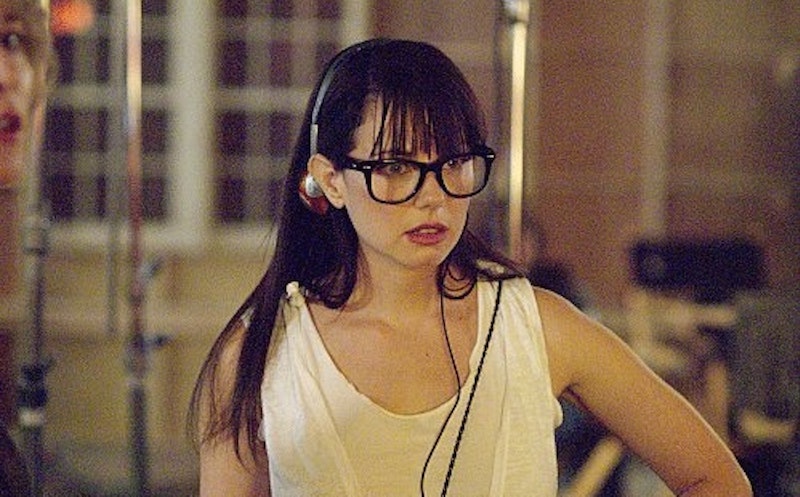 First Showtime revives Twin Peaks, and now it's been reported that The L Word might be getting a sequel. According to Entertainment Weekly, the influential LGBTQ drama, which aired on Showtime from 2004 to 2009, will be back to take us inside the lives and loves of a group of queer women living in California. The show's original co-creator Ilene Chaiken has already signed on to executive produce the project, along with stars Jennifer Beals (Bette Porter), Katherine Moenig (Shane McCutcheon), and Leisha Hailey (Alice Pieszecki), who will also star in the series "if it moves forward." (As of now Showtime has not commented on the story.) Fans might have noticed a name missing, however, and whether or not Mia Kirshner will be in The L Word sequel is a mystery. Bustle has reached out to her representatives for comment, but did not receive an immediate response.

Kirshner played Jenny Schechter until the sixth season of the series. In the pilot, Jenny is a writer living with her boyfriend amongst a group of lesbian women, but soon the series follows her sexual awakening and her often confusing and sometimes infuriating journey to truly find herself. That is, until — SPOILER — she's found dead in Bette and Tina's swimming pool in the Season 6 premiere. It was shocking and upsetting, more so because Jenny's murder goes unsolved. It didn't help that every character on the show was a possible suspect, which should make this reboot very interesting.

Of course, it's possible this sequel could lead to some closure, but it's also unlikely. Why would The L Word's new writers want to rehash a storyline that was so maligned? And yet how would this major plot line go completely unchecked in this new series? It'll definitely be interesting, but it likely won't include a reoccurring role for Kirshner, who called Jenny "maddening to play" because she was a complicated, but often unlikeable, character. If nothing else, Kirshner could return in flashbacks, which may be enough for Jenny fans to get their fix — especially if it leads to some justice.

Whether the actor is involved in this reboot or not, she's clearly excited to hear it's returning. Last month, she retweeted Entertainment Weekly's story that everyone in the cast wants a revival. "The L Word needs to come back. Right?" she wrote.

Back in May, Chaiken told EW that making more seasons of the L Word is always on her mind. "We talk about it all the time,” Chaiken said. “When we went off the air in 2009, I think a lot of people thought, Okay, the baton is passed now, and there will be lots of shows that portray lesbian life. There’s really nothing. It feels like maybe it should come back.”

There's no doubt in 2017 a show that delves in to the lives of women, whatever their sexual preference, is something to get behind. Even if Mia Kirshner is sitting this one out.

More like this
Here’s Why Danny Masterson’s Hyde Isn’t In 'That '90s Show'
By Brad Witter
The 'New Amsterdam' Series Finale Opens An “Unexpected” Door To The Future
By Brad Witter
Netflix Shut Down 'Bridgerton' S3 Rumours About A “Very Dark” Storyline
By Bustle
Linda Ronstadt’s “Long Long Time” Plays A Pivotal Role In The Last Of Us
By Brad Witter
Get Even More From Bustle — Sign Up For The Newsletter
From hair trends to relationship advice, our daily newsletter has everything you need to sound like a person who’s on TikTok, even if you aren’t.