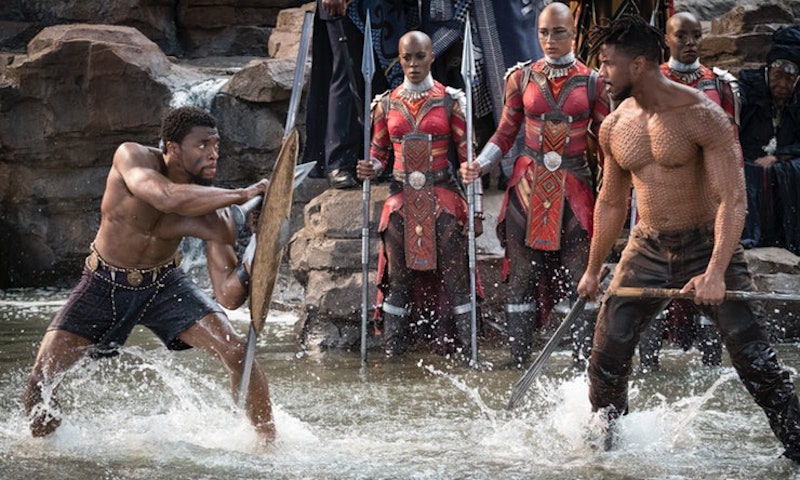 Spoilers ahead for Black Panther. Of all the many, many things about Black Panther to be excited about, one of the most thrilling is the movie's impressive cast. From Chadwick Boseman to Lupita Nyong'o to Danai Gurira, the film, out Feb. 16, is filled to the brim with talented, A-list actors. One of the Marvel movie's biggest names is Michael B. Jordan, who plays the villainous Killmonger, a Wakandan raised in America who comes back to the African country determined to overthrow T'Challa (Boseman) as king. But while fans will undoubtedly love seeing the Creed actor take on the role, Killmonger's fate in Black Panther could mean Michael B. Jordan won't be in more Marvel movies down the line.

Throughout Black Panther, Killmonger is focused on taking the Wakandan throne, despite it belonging to T'Challa. Killmonger believes that he's actually entitled to be king instead, because he's the son of Wakandan royalty, and he has plenty of violent, dangerous ideas about how the country should be run. When he arrives in Wakanda, Killmonger demands that T'Challa physically fight him for the title, and the man otherwise known as Black Panther reluctantly agrees to do so. After an intense, terrifying battle, T'Challa gains the upper hand, but Killmonger isn't killed, just badly injured. And once he accepts that T'Challa has won, he gains a grudging respect for the real king. The duo go to view a gorgeous Wakandan sunset together, and afterwards, Killmonger decides to kill himself rather than be taken into custody, telling T'Challa that "death is better than bondage."

It's a powerful scene, and it seems like it marks the end of Killmonger's (and thus Jordan's) appearance in the Black Panther world, seeing that the character is most definitely dead. But this is Marvel, after all — is there a chance that Killmonger could make a return in some form or another when the inevitable Black Panther 2 rolls around? Well, it's definitely possible. For one thing, flashbacks could always happen, and a sequel film could absolutely shed more light on Killmonger's childhood (when he was known just as Erik Stevens) or his later time in the military. Audiences learn in Black Panther how the character got his ominous-sounding name (he killed a lot of people, and has the tattoos to prove it), but there's always room to explore more about those events.

And it seems Jordan would most definitely be down to do just that. In many interviews, the actor has expressed his excitement over appearing in Black Panther, so it's not a stretch to assume that he'd be totally cool with appearing in a sequel if the plot allowed for Killmonger to make a return. ""When [director Ryan Coogler] told me his vision for the movie and for the character and kind of what he wanted to do, along with the cast … dealing with Marvel was a no-brainer, it was no hesitation," Jordan told Good Morning America in a recent interview. Considering how awesome a character Killmonger is and how great Black Panther is overall, it's no wonder Jordan was completely on-board with the film.

Black Panther 2 hasn't been officially announced just yet, but with so much excitement around the movie (not to mention those huge expected box office sales), it'd be a shock if the sequel wasn't greenlit sometime soon. And after that happens, fans will get to find out for sure if Killmonger is gone for good, or if Jordan will get to be a bigger part of the Marvel Cinematic Universe despite his character's on-screen death. Wakanda may not need Killmonger any more, but audiences most definitely do.