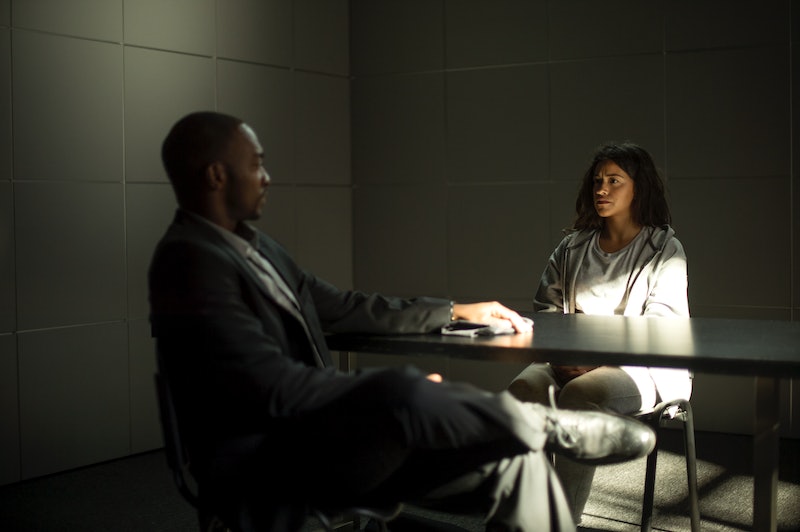 Major spoilers for Miss Bala ahead. The action is only just beginning for Gloria in Miss Bala. Gina Rodriguez's high-stakes thriller seems for a while as though it'll end with every thread tied up... until the final scene proves otherwise and possibly sets up a Miss Bala sequel, which Rodriquez tells Bustle she's absolutely open to. Gloria singlehandedly takes down the Los Estrellas cartel, having been abandoned by the DEA, but what she doesn't know is that the CIA had been monitoring the cartel the whole time through Lino's (Ismael Cruz Cordova) US contact Jimmy (Anthony Mackie), an undercover agent. It should have been clear that Jimmy was secretly more important than he seemed. You don't cast an Avenger for just one scene!

Once the dust has settled on the cartel shoot-out, Gloria finds herself face-to-face with Jimmy again, having ditched his gang look in favor of looking professional in a suit and tie. He wants to recruit her for the CIA, having been impressed at her survival skills and success in taking out a cartel the CIA couldn't. So after making sure her friends are released from jail and safely home, Gloria gets back into the car with Jimmy to drive off to her new life as a spy. That ending leaves the door wide open to make Miss Bala (in theaters now) an action movie franchise starring a Latina woman, something that Rodriguez believes the world absolutely needs now more than ever.

"Should we be blessed enough to have that opportunity I would be very humbled and very grateful and very down," Rodriguez tells Bustle of returning to play Gloria in a sequel. "What's really important to me is that hopefully this film is a reflection of how valuable the Latina community is and how valuable the Latinx community is. My prayer is that we show everyone that there shouldn't just be one of these a year. There should be many, many more."

And Rodriguez doesn't believe the box office numbers for Miss Bala should be the deciding factor in whether or not more films like it are made. "Whether it's successful or not, I hope they just continue to make those efforts because the Latinx community deserves it," she says. "We hold up movies every weekend at the box office so hopefully we can hold up this one. But should we not, hopefully they do it the same way they do any other movie or franchise about other communities — they just make another one."

She pauses, then adds, "Hopefully this doesn't limit the opportunities for the other Latinas that want to be leads because that's my prayer more than anything else is that other women and men of the Latinx community get the opportunity to be the lead because we have so few, and that we get to do it in front of and behind the camera with studio money."

If Miss Bala does get a sequel, Rodriguez already has some ideas on what she would want to see from Gloria's future now that she's joined the CIA. "I want to see that she gets to go all over the world and be a CIA agent and use her skills in a different way," Rodriguez says. "That would be awesome to see her completely coming in to her own. I've always been kind of ambiguous, like, 'Is she Pacific Islander, Filipino, Asian, Latino, this or that?' It would be cool to chameleon as I kind of have in my life. That would be dope to see how Gloria fits into another part of the world and how she chameleons too."

"I love that she ends up empowered and feels like she could do so much more with her life in the world at the end," director Catherine Hardwicke says, visibly excited at the idea of a sequel. "If we got to do more, that would be awesome. I love Gina, I'd love to see her kicking ass all over the world."

And Hardwicke agrees with Rodriguez that Gloria would be successful as a spy in lots of different countries because of her background and strength. "As a Latina, she could fit into many different worlds and would make a great spy or operative," Hardwicke says. But what she believes is most important about bringing a female-starring action franchise to life is "having a character that you care about and you love," she adds.

"Gina instantly makes you like her," Hardwicke explains. "I want that lovable quality to come out onscreen, that indomitable spirit she has. If I was ever down or depressed about some part of the production, she did not let me wallow in any kind of pity or regret. Solve the problem and keep going. I like that in an action star, move forward in a positive way and problem solve. That's a fun character to watch in movies. She's going for it, she's brave and bold."

If the movie finds its audience, we may be seeing a lot more of Gloria, utilizing her skills all over the globe.

More like this
On 'The Handmaid’s Tale,' Christine Ko Fights Back
By Gretchen Smail
Jinkx Monsoon Is About To Get Real Sketchy
By Sam Ramsden
The New Bachelor Will Be Announced Next Week & Here Are The Top Contenders
By Grace Wehniainen
14 Women To Watch This Oscar Season
By Marina Watts
Get Even More From Bustle — Sign Up For The Newsletter