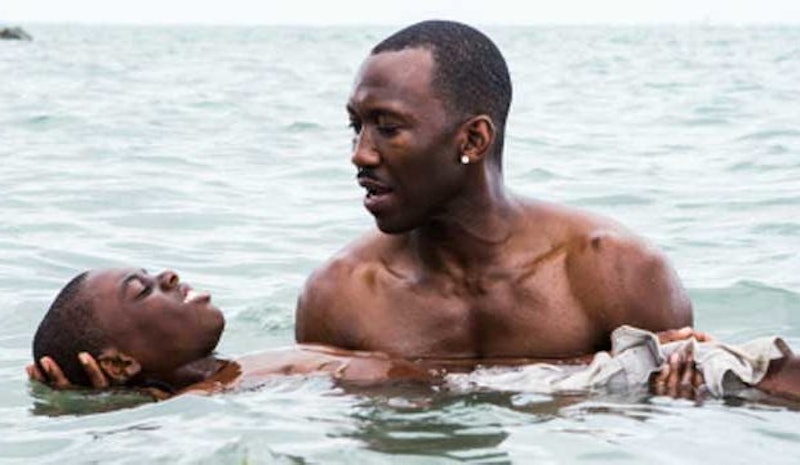 If you're a passionate movie or TV fan, there's no time like awards season. Every year, the months of January and February are filled with shows honoring the best pop culture around, and 2017 is no exception. Sunday night's Golden Globes celebrated the greatest movies and TV shows to come from 2016, including Moonlight, the film that won Best Motion Picture — Drama. Now that it achieved that honor, will Moonlight win the Best Picture Oscar? It's definitely possible.

The beautiful, unique coming-of-age film, directed by Barry Jenkins, has been an Oscar frontrunner for months. The story of a black, gay man growing up in Miami, Moonlight received rave reviews when it came out in theaters, and it's picked up numerous awards since then, including Best Acting Ensemble from the Critics Choice Awards and Best Film from the National Society of Film Critics. From the original and compelling story to the must-see lead performances (including the supporting turn from the much-acclaimed Mahershala Ali), Moonlight has been one of 2016's most talked-about movies all year long.

Yet while it undoubtedly has a strong chance at winning Best Picture at the Oscars, it will have some tough competition. La La Land, Damien Chazelle's romantic musical, is the true frontrunner to win Best Picture, and, considering that it won the Golden Globe for Best Motion Picture — Musical or Comedy, as well as as several other awards, that potential is even likelier. With beloved stars (Emma Stone and Ryan Gosling), gorgeous songs, a delightful script, and a crowd-pleasing ending, La La Land has all the makings of a Best Picture winner. I, for one, am confident that it'll take home that award.

Still, don't count Moonlight out. Thanks to the Globe win, the film has a real chance of turning Oscar voters away from La La Land and snagging that coveted Best Picture win.

More like this
2023 Oscar Nominations List: 'Everything Everywhere All At Once' Leads With 11 Nods
By Jake Viswanath
Twitter Is Overjoyed By Angela Bassett’s Record-Making Oscar Nomination
By Maxine Harrison
Why Andrea Riseborough Is Confused By Her Oscar Nomination For Best Actress
By Jake Viswanath
12 Years Ago, Austin Butler Manifested His Oscar Nom In This Disney Movie Scene
By Jake Viswanath
Get Even More From Bustle — Sign Up For The Newsletter
From hair trends to relationship advice, our daily newsletter has everything you need to sound like a person who’s on TikTok, even if you aren’t.