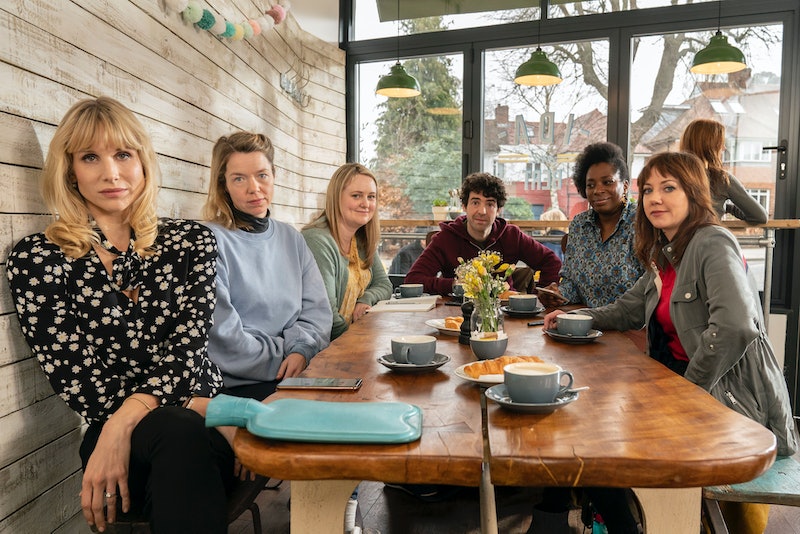 Motherland is one of the best British comedies around right now, and is happily sitting on my current roster of hilarity beside the likes of Derry Girls, This Way Up, and Fleabag. I'm definitely not prepared to say goodbye to the show just yet, but it's set to finish its second instalment on Monday (Nov. 11). So will Motherland return for series 3, or will it forever remain as a two-part masterpiece?

Get ready for some fantastic news, because Motherland is continuing with a third series. As Deadline reports, BBC confirmed Motherland's recommission a week before the second series started airing in October. "The sheer amount of top of their game comedy brains both in front and behind the camera in on show is staggering," Shane Allen, Controller of Comedy Commissioning said in a press statement. "Series two has the sharpest and paciest writing which places our relentlessly inept ensemble in to ever inventive heights of degradation, we want more and we want it as soon as possible."

"This is a show that will run for as long as the team are able to keep making it and is the easiest commissioning decision this side of renewing Coronation Street."

Show creator Sharon Horgan also gave a humble thanks to Allen for the opportunity to continue the show. "Making the second series of Motherland was even more therapeutic than the first," she told the BBC. "We gratefully accept Shane Allen's offer of further treatment courtest of the BBC."

Understandably, there's no release date for the third series just yet. But as the BBC writes in their statement, "[t]ransmission information for Motherland series three will be announced in due course." Radio Times reckons it'll follow the same broadcast schedule of its second series, meaning sometime in October 2020.

Despite this, there's a fair amount of info floating around about the next chapter. This includes the BBC confirming that the current cast will be back reprising their roles, and the stories that may possibly be covered — especially for Kevin (played by Paul Ready). "Kevin's got a huge sad story, I don't want to bring people to tears but he's got a massive hole in himself that he's trying to fill," Ready said during a screening for the second series. "We want him to find love — we really want him to find someone who loves him the way he deserves."

You can catch up with series 1 and 2 of Motherland on BBC iPlayer.

More like this
Everything To Know About The 'Daisy Jones & The Six' TV Series
By Maxine Harrison and Brad Witter
'The Last Of Us' Has Officially Been Renewed For Season 2
By Darshita Goyal
'Boiling Point's TV Sequel Is Set To Deliver A “Rollercoaster Of Emotions”
By Catharina Cheung and Sophie McEvoy
Twitter Is Burning As Phoebe Dynevor Reveals Daphne’s 'Bridgerton' Exit
By Sophie McEvoy
Get The Very Best Of Bustle/UK
Sign up for Bustle UK's twice-weekly newsletter, featuring the latest must-watch TV, moving personal stories, and expert advice on the hottest viral buys.