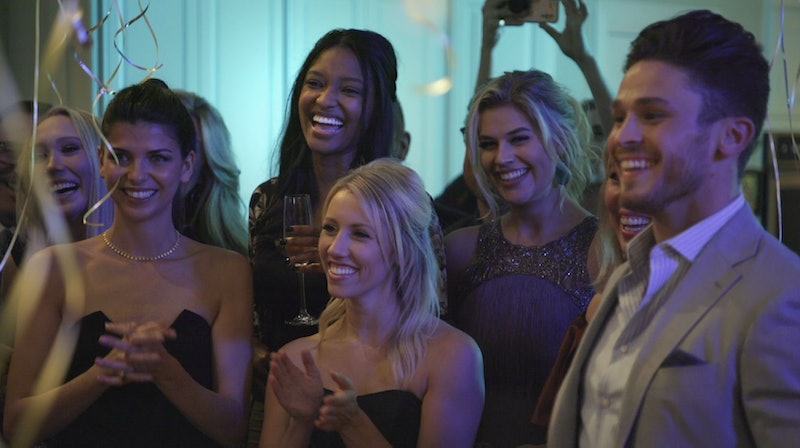 Not long ago, eight young adults chose to navigate the ups and downs of their professional aspirations in Nashville on CMT's Music City. Season 1 was kind of a warm-up, one that allowed the group —Rachyl, Kerry, Alexandra, Jackson, Alisa, Jessica, Bryant, and Sarah — get to know one another. Now, Season 2 is really bringing the heat, which will ultimately come to a boil during the season finale on Thursday, Jan. 31 at 10 p.m. ET. Now that the cast is comfortable, they're likely to keep filming as long as people are watching. Which means Music City just has to return for Season 3

Alexandra Harper, Miss USA competitor, seems to think there's a storyline in Music City for everyone. "The first season was great, but this is on a different level,” she told HollywoodLife. “It’s really good entertainment, but it’s also really relatable. There’s a married couple, there’s a relationship that literally formed on the show and now they’re fighting, and then there’s me and Jackson [Boyd], who are related. There’s all this different stuff going on and I think people like to feel like their life is somewhat similar to something, and they can relate to it.”

Her cast mate, Rachyl Degman, had similar thoughts. “There’s way more drama and passion involved [this time], she said. "We all knew each other before season one, but we got closer and closer.” Rachyl is married to Kerry Degman, and their relationship is definitely put to the test during Season 2 of Music City. "It's kind of a day-to-day, week-to-week thing for us," Rachyl told PopCulture. "We just have one of those marriages that's a little more difficult than others, so we're just fighting as hard as we can, sometimes with each other and sometimes for the marriage."

The show is under high expectations considering its esteemed creator, The Hills and Laguna Beach's Adam DiVello. "My idea with this [Music City] always started with the scripted show Nashville," he told Entertainment Weekly. "And I was such a huge fan of that show when it was on ABC. And then it went over to CMT. I was trying to put together a reality version of Nashville back when it was on ABC. I had an overall deal with Lionsgate… They produced Nashville, and I said, 'Please, let me go do a reality version of this.'"

With a few tweaks, DiVello eventually got his wish, and in August of last year, according to The Tennessean, it was renewed for a second season. Prior to the Season 2 finale, a Season 3 renewal has not yet been announced. But, there's still plenty of time for the cast and crew to make the official call.

The show isn't the only reality series to see recent success in Nashville. Also set there is Very Cavallari, which documents Kristin Cavallari's flourishing jewelry business, its Nashville flagship store, and its young and wild crew of employees. And if you're a true reality TV junkie, you already know that the Tennessee hot spot isn't the only commonality the two shows share. Remember where Cavallari got her start?