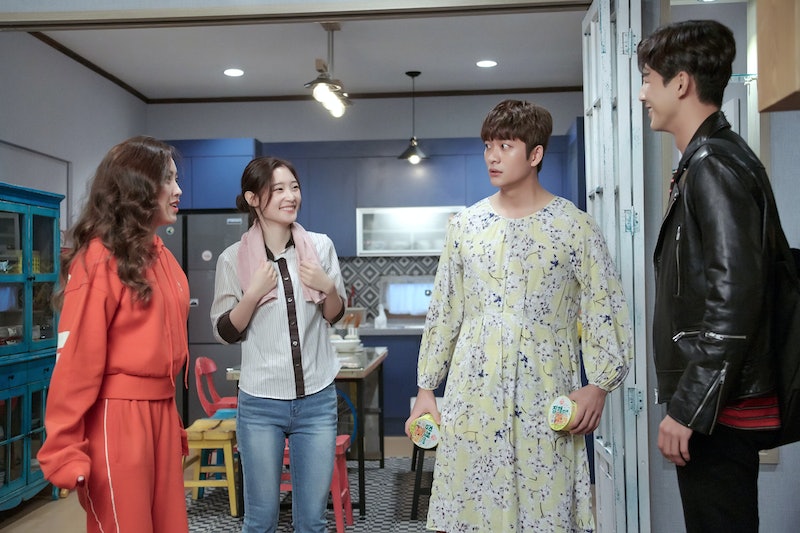 Netflix's My First First Love, premiering April 18, is the perfect way to shake off the winter blues and usher in the spring season. Even if all you want to do is lay in bed and marathon a new show, it will allow you to at least feel like you're outdoors enjoying the nice weather: it has love, friendship, and all the warm fuzzies you could want. Plus, you can feel pretty comfortable getting invested in all of the characters: though a My First First Love Season 2 hasn't officially been announced, it seems pretty likely that it will happen, considering more episodes have already been filmed.

According to Variety, the college-age Korean drama shot 16 episodes, with the first eight being released in Season 1. Assumedly, Season 2 will feature the eight remaining episodes. Per Netflix, the series follows Yun Tae-o, a college student whose friends — including his close friend Han Song-i — move into his house for different reasons. The group begins to learn lessons about love and life as they become intertwined in the messiness of being early 20-somethings. And, as expected, the main duo starts to realize that they may have been in love with each other the entire time. It's a classic rom-com stretched out into a full-length series.

The general plot may not be enough information to entice some potential fans, but My First First Love's trailer has just the right amount of bright colors, upbeat music, and fun to win anyone over. It doesn't tease many details about the plot, how this group of friends all know each other, or why they're all living in one house, but Han Song-i’s dilemma over whether to keep pursuing her growing crush or to look twice at her friend is front and center.

The crew does all the typical things that a house full of college students would do – flirt, laugh, hang out in sweats, eat terribly, marathon TV in massive blankets, and talk about their complicated lives. It's always a win to see the more diversity in the romance genre, so hopefully fans will latch onto this series.

Viewership is a big deal for Netflix, but thankfully, this cast has a lot of familiar faces. The My First First Love cast includes several K-pop stars like Jung Chae-yeon of DIA and Jung Jin-young of B1A4 that will probably draw in large audiences who already know them from their music careers. Kim Ji-Soo, who portrays Yun Tae-o, is also a well-known Korean actor and personality with a legion of fans. It honestly wouldn't be surprising if this show turned out to be another huge Korean language hit for Netflix like its predecessor Kingdom.

My First First Love is already prepared to come back for another seasons, so fingers crossed that Netflix will make an official announcement soon. Until then, K-pop and drama lovers can start falling in love with these characters for the first (first) time — and hopefully not the last.