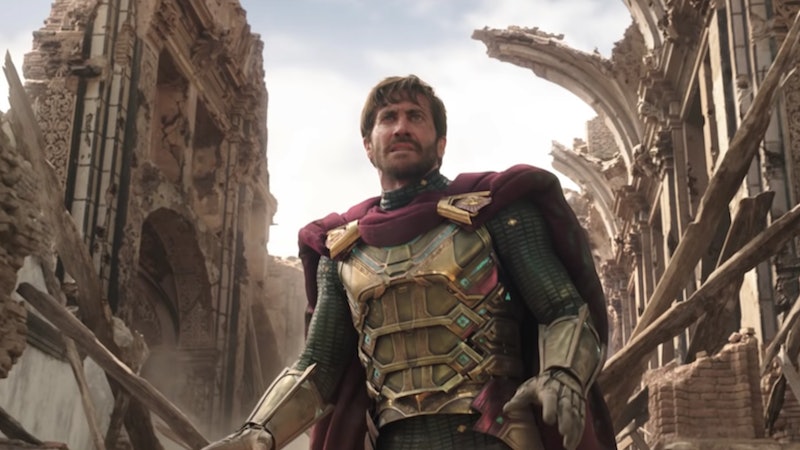 Could a villain be joining the ranks of Marvel’s elite crime-fighting superheroes? Or more specifically so, will Mysterio join the Avengers? A new Spider-Man: Far From Home trailer teases a post-Endgame world where the nefarious illusionist is enlisted into the Avengers by none other than Peter Parker (Tom Holland). On Tuesday, June 18, Marvel released a new international trailer for the upcoming Spider-Man: Far From Home, in theaters on July 2, which follows Peter Parker during a school trip to Europe after the tumultuous events of Avengers: Endgame. In the new promo, Nick Fury (Samuel L. Jackson) instructs Spider-Man to enlist a new Avenger to combat a new, looming threat against the world.

“Now this threat is here,” Fury says to Spider-Man in the trailer. “The world is in chaos. I need a new team. I need an Avenger.” After Spider-Man invokes the names of possible original members who are ultimately unavailable (such as Thor, Doctor Strange, and Captain Marvel), he's then seen shaking the hand of Mysterio (Jake Gyllenhaal) in a later scene and says, “Welcome to the Avengers.” Well, this is certainly an interesting turn in events.

As fans will recall, Endgame concluded with the death of villain Thanos (Josh Brolin), and, in turn, Tony Stark (Robert Downey Jr.), after he wielded the powers of the Infinity Stones and snapped Thanos to his peril. Now, in Spider-Man: Far From Home, Mysterio (also known as Quentin Beck) is introduced as a hero from an alternate dimension cultivated from Thanos' snap at the end of Infinity War.

But, is he…? Mysterio is a master illusionist, after all. As the Hollywood Reporter has acutely noted, the circumstances surrounding Fury’s decision to bring on a new Avenger are suspicious, indeed. The publication has posited that the Fury presented in the Far From Home trailer isn’t actually the real Fury at all, but perhaps an illusion created by Mysterio, a cunning trickster. So, is Mysterio’s entry into Marvel’s elite group of heroes built on a foundation of deceiving lies? Or, does Jake Gyllenhaal and his sexy facial hair really join the group of Avengers?

While Mysterio’s true motives in Far From Home will remain a mystery until the film’s July 2 theatrical release, director Jon Watts has so far indicated that Mysterio and Spider-Man’s relationship will take the form of allies. In a cast interview with Entertainment Weekly in April, Watts paralleled the dynamic to that of a “cool uncle.” He told the publication, "If Tony Stark was sort of the mentor in the previous films, we thought it would be interesting to play Mysterio as almost like the cool uncle.” If this much is true, Holland and Gyllenhaal have already established a friendly dynamic. According to Watts, the two got along so well on set that “it was a problem” while filming. “Sometimes they would crack each other up, and we could not get through takes occasionally,” Watts told the publication. “It was a problem!”

During the cast interview, Holland also revealed that he’s wanted to work with the Donnie Darko actor for quite some time.

“If you look at any interview I’ve ever done prior to this movie and someone asked me, ‘Who would you work with if you could work with any actor?’ I would’ve said ‘Jake Gyllenhaal,” Holland said. “And when I found out it was him, I was stoked, but also really nervous. But Jake absolutely was more than I ever could have expected.”

Aw. While Mysterio and Spider-Man's true dynamic won't be revealed until next month, fans can take solace in the fact that Holland and Gyllenhaal are BFFs IRL.