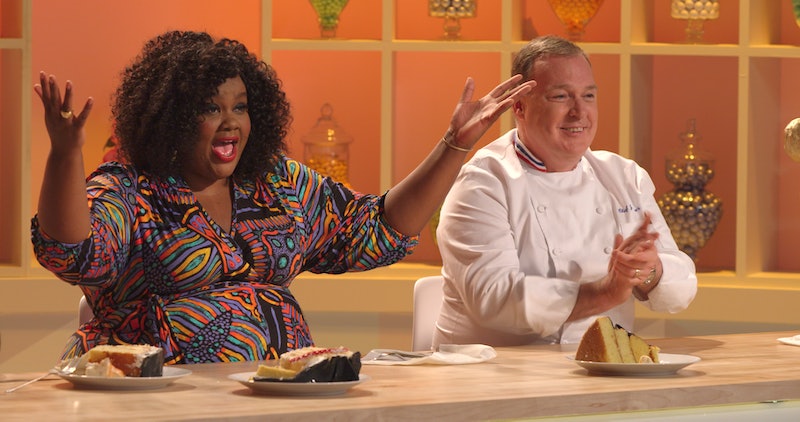 The funniest new baking show is also the most tragically short. Nailed It premieres Season 2 on June 29 with six more delicious episodes, but the whole season goes by in a flash. You can literally marathon the whole thing in about three hours. What's a fan of baking fails to do after that? Never fear, because Nicole Byer is (most likely) here! While more episodes of the show haven't been announced by Netflix yet, Nailed It returning for Season 3 is really more of a "when" than an "if."

The show was so hugely popular after its March 2018 premiere that Netflix ordered a new season just a short two weeks later. The premise of Nailed It makes it hard for the show to go wrong (even though the bakers often do). Over the course of two challenges per episode, three bakers try to replicate fancy cake art — and it always goes terribly, beautifully wrong.

It's the kind of show that can't get stale (even if the cakes can), because there will always be three new, terrible bakers making new, terrible mistakes. You wouldn't think that someone would accidentally use salt instead of sugar or make an even scarier Donald Trump than the one that's currently in office. But they do!

The passion that fans have for watching other people charmingly fail to bake elaborate cakes could carry this show well beyond Season 2 and into possible Seasons 3, 4, and more. As Vulture reported, Netflix is making a major push into the reality TV space right now — and reality cooking competition shows have been a big success for network TV. The streaming site would do well to keep their own version around for Season 3 and beyond.

As for when fans might be able to expect more episodes, the timeline is promising. There were only three months between Nailed It's first and second seasons. If Netflix sticks to that lightning quick timeline, fans could see another six episodes drop in September or October of 2018. That's the thing about producing just six episodes of baking challenges that film in a day — you can have a pretty quick turnaround. Such is the appeal of reality TV as a genre. Turn the cameras on, watch something happen, edit in post. Things can happen pretty quickly.

Netflix's vice president of content acquisition, Bela Bajaria, highlighted the company's emphasis on speed when producing shows. She told Vulture, "There’s such a speed here — of efficiency, of decision-making — and there’s a lack of process and layers. There’s just a quickness and a nimble, ‘Let’s try something, let’s make something.'"

With that in mind, more Nailed It is likely to return in a matter of months, compared to Netflix's year-between-seasons model for most of its scripted shows. But, if you can't even wait even that long for more fun cooking content, fear not. Sugar Rush, a project from the producers of Nailed It, will hit Netflix on July 13 to tide viewers over, according to Eater. Billed as another baking competition show, this one is all about speed in the kitchen. According to the show's synopsis: "Time’s the most important ingredient as competitive teams race against the clock to bake up the best-tasting sweets."

This show seems more focused on talented bakers working quickly, so it loses some of the Nailed It charm of watching people bumble around mixers and overfill cupcake pans. But, racing against a countdown clock could still make for some interesting baking drama.

In any case, it's clear that Netflix is all about reality TV these days, and baking shows in particular, so you can likely count on a Nailed It Season 3 renewal soon. Then six new episodes will pop out of the oven in a matter of months. Hope you're hungry!