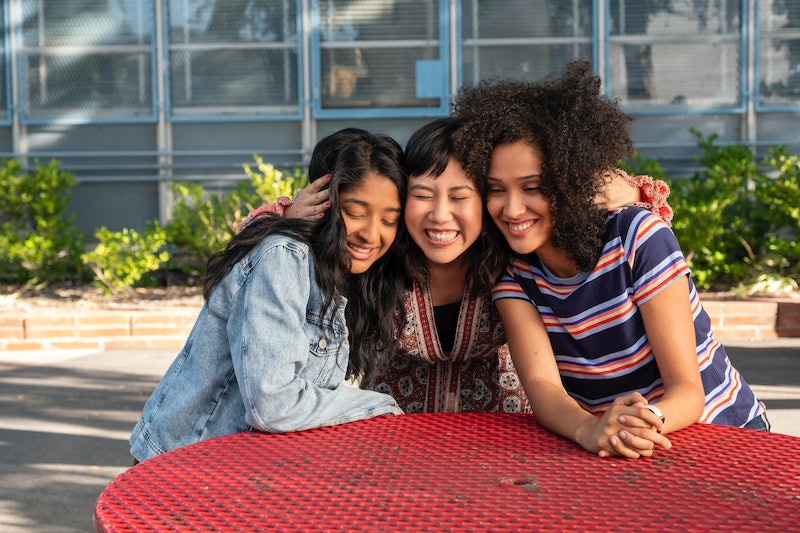 Update: Netflix announced on July 1 that Never Have I Ever will return for Season 2. An official premiere date has not yet been revealed.

Earlier: With her father's ashes bid-adieu, a move to India on the horizon, and a love triangle blooming with Ben and Paxton, Devi's life is more complicated than ever by the end of Never Have I Ever Season 1. Netflix has yet to announce if Never Have I Ever will return for Season 2, but the final episode sets up several plot lines that are begging for more exploration, from Devi's love life to where Fabiola, Eleanor, and Kamala will go from here.

The waiting period for Netflix renewal news is typically a month after the premiere, which is what happened for similar YA titles like Sex Education and Locke & Key. On the flip side, I Am Not Okay with This debuted in late February and has yet to be renewed or canceled, so it could be well into the summer before Netflix announces if Never Have I Ever will get a second season. In the meantime, here are all the questions a potential Season 2 will hopefully address.

Is Devi moving to India?

Devi manages to catch Nalini and Kamala on the beach before they spread her dad's ashes, but she never gets a chance to talk to her mom about the international move. If the rift between them is somewhat repaired, is Devi more open to moving with Nalini? Is Nalini even going still? It would feel like a very different show if Devi was in India, but Devi still seems embarrassed about actually being Indian, so even a brief stint there could help her journey toward self-acceptance.

Are Devi and her mom made up?

There's a lot of old wounds between Devi and Nalini, and spreading Mohan's ashes together is likely just one step towards them healing. Never Have I Ever implies that their fight before Devi's concert had a major part to play in Mohan's heart attack, so it's likely going to take a while before they can really say their relationship is mended. Maybe we'll see Nalini going to therapy in Season 2, too?

Are Devi and Ben a couple now?

Looking at it now, it was telegraphed from the beginning that Ben had a bit of a crush on Devi. (Come on, he learned Chinese just to "spite" her!) Unlike Paxton, Ben isn't presented as being crazy hot or popular, but he is there when Devi needs him, and even helps Devi reconnect with her friends and family. He seems like an all around healthier option for Devi, but how genuine was her kiss? We know Ben probably like likes Devi, but is Devi using Ben for comfort, in the same way she kind of tried to use Paxton for sex?

After Paxton's sister calls him a shallow douche for ghosting Devi, he goes to Devi's house, likely to apologize and prove his sister wrong. Unfortunately for him, she's at the beach making out with Ben when he arrives, but his endearingly awkward make-up effort does hint that he likes Devi more than he's let on. If Ben and Devi do become a couple, will Paxton fight for her affections, or will he decide it's not worth the effort?

What happened to Eleanor's mom?

Poor Eleanor. Her mom leaves without a word of goodbye, and for a while it ruins Eleanor's own aspirations to become an actress. Eleanor is finally convinced to try out for the high school play again, but is her mom ever going to return? And will we ever see what Eleanor's home life is like without her mom?

Are Fabiola and Eve dating?

After Fabiola accidentally comes out to the whole school (and later to her mom, but on her own terms), Eve approaches her about going on a date. Will we see Fabiola and Eve actually start dating, and how Fabiola's will family react to her bringing a girlfriend home?

Is Kamala going to stay with her fiancé?

One of the most amusing reveals of the season is that Kamala's much-derided arranged marriage fiancé, Prashant, is actually a kind and easygoing guy, and ridiculously handsome to boot. Kamala was very resistant to marriage when she was with Steve, but will that change with Prashant? He seems totally cool with her pursuing her education, but is it really possible that a guy can be that perfect?

Most importantly, will we see more of Paxton's sister?