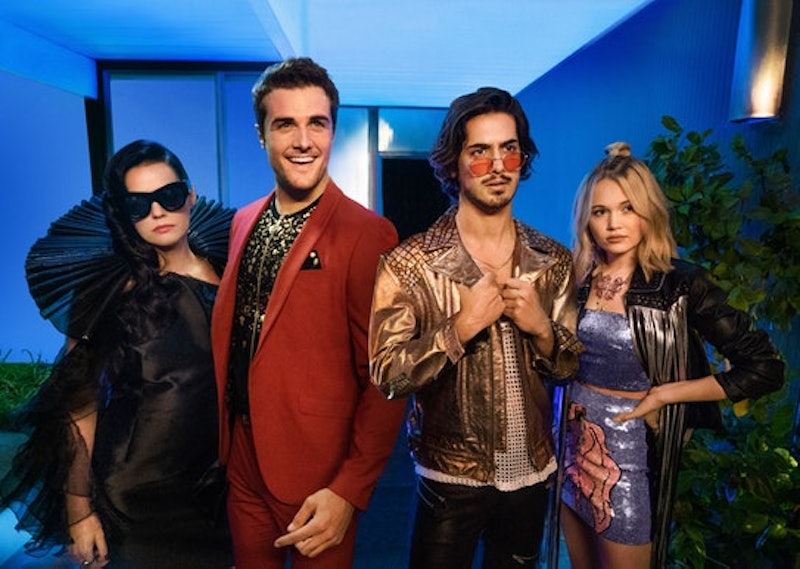 Starz' proudly sexual sci-fi Now Apocalypse splashed onto television with a style and a voice entirely its own. But fans who were dreading the week-long wait between episodes have received an unexpected surprise on March 22 when the entire series suddenly became available for streaming after two episodes had aired Sunday nights on the network. Now that Now Apocalypse is available in full, however, the sudden release begs the question of whether or not Now Apocalypse will return for a second season or if Starz simply dropped the show just for the sake of dropping it.

In addition to making the entire first season of the show available for streaming on Starz, the network also made the show's first episode available for free on Youtube. In a press release, President of Programming for Starz Carmi Zlotnik said of the decision that:

"Gregg Araki has created a vibrant world filled with relatable characters and relationship storylines and we have found that many fans want to consume this content as soon as possible. We are giving this audience every opportunity to dive into the crazy world of Now Apocalypse and ride the roller coaster of the season at their own pace.”

While it's pretty unusual for a network to suddently drop an entire season, Netflix-style after running week to week, this is very good news for fans who weren't ready to wait for the next installment. And it might even be a good way for people who had missed the premiere to find and fall in love with the show.

For better or worse, Now Apocalypse is a niche series. A sex-positive and proudly queer coming-of-age tale that is also science-fiction from a cult cinema icon available on a premium cable channel only stands so much of a chance to compete with the Whiskey Cavaliers and Modern Family's of the world, or audiences more content with re-watching Friends or The Office for the umpteenth time. (Hey, we've all been there.)

Starz has not yet announced whether or not Now Apocalypse will be renewed for Season 2, but the pivot in release strategy could help build a fanbase for the show faster than the one-episode-a-week method. Many of television's recent successes, such as Breaking Bad, Brooklyn Nine-Nine, and Game Of Thrones exploded in popularity thanks to the ability to catch up on early seasons via marathon watching on streaming platforms. There's literally no excuse anymore to say that you're not "recent" on a show — what are you doing on your weekends if not marathoning television?

Could the ability to watch the whole first season in one go impact viewership? Will Starz be adapting this release method with other shows in the future? What, exactly, is going on with all of the lizards that Ulysses is seeing? There are a lot of questions about how this decision will affect Now Apocalypse, Starz, and possibly all of premium cable, but if nothing else fans can rest easy knowing that they won't have to wait for two more months to be able to watch the entire first season in one sitting. Enjoy the sex lizards.

More like this
'Heartstopper' S2 Just Welcomed Four Brand New Cast Members
By Nola Ojomu and Sam Ramsden
An 'Everything Everywhere All At Once' Star Just Joined The 'Loki' Season 2 Cast
By Grace Wehniainen
Nicola Coughlan Shared A Lady Whistledown Excerpt From ‘Bridgerton’ Season 3
By Grace Wehniainen, Alyssa Lapid and Sam Ramsden
‘Squid Game’ Creator Hwang Dong-Hyuk Just Dropped A Major Season 2 Tease
By Brian Anthony Hernandez and Bustle Editors
Get Even More From Bustle — Sign Up For The Newsletter