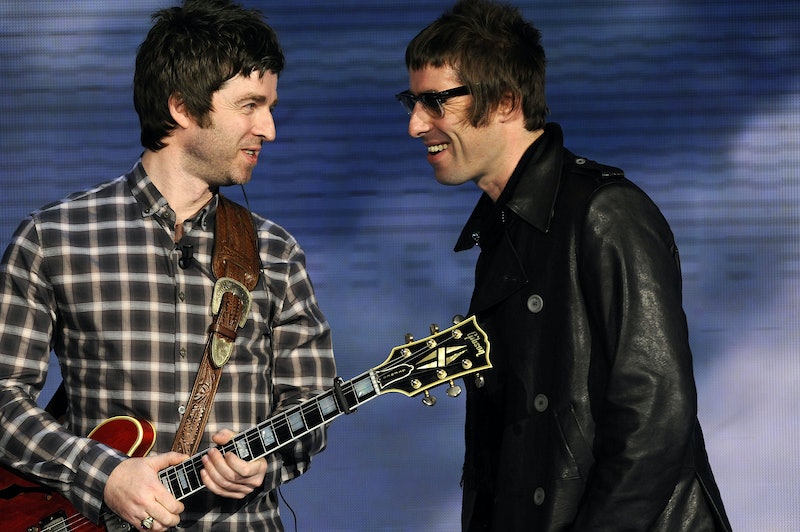 Strap in, Oasis fans, because a moment you never thought possible could be right around the corner. The warring brothers could be months away from a reunion — and on the Glastonbury stage, no less. Individual comments from both Liam and Noel Gallagher have led fans to believe that both could be playing the legendary festival, while others have drawn an even grander conclusion: that Oasis could reunite to headline the whole affair. So will Oasis get back together in 2019? Let's take a look at where the rumours began.

Noel Gallagher, whose High Flying Birds received a Mercury Prize nomination this year, told the Mirror, "I would absolutely love to play Glastonbury next year." Gallagher added, "I love that festival but I’ll probably be fourth on the bill." That's an exciting statement for his fans, of course, but where does Oasis come into it?

Well, brother Liam played pre-Glastonbury event the Pilton Party in August, as NME reports, and subsequently thanked festival organisers Emily and Michael Eavis, tweeting, "see you both nxt year." Rumours subsequently began that Liam Gallagher will headline Glastonbury 2019, and Noel's comment to the Mirror puts both brothers in the same place at the same time. So could a reunion be on the cards?

There's a long and fraught history between the Gallaghers, so an Oasis headline show would be no small matter. The band split in 2009 in the midst of a world tour, according to the BBC. Noel told fans, "It's with some sadness and great relief to tell you that I quit Oasis tonight," adding, "People will write and say what they like, but I simply could not go on working with Liam a day longer."

To trace the brothers' tortured relationship ever since would require a full dissertation; instead, allow me to catch you up on the events of the last few years. In 2017, Noel collaborated with former arch-enemy Damon Albarn on Gorillaz track "We Got The Power", a surprising move given the once furious rivalry between Oasis and Albarn's band Blur. When Vulture asked Noel what Liam would think of the collaboration, he didn't mince his words. "Listen, nobody gives a f**k what Liam thinks about anything," Noel said. Ouch.

In May 2017, Liam claimed he wasn't invited to Noel's 50th birthday party — but tweeted his estranged brother birthday wishes, as NME reports. Then, in June, Liam criticised Noel on Twitter for not performing at Ariana Grande's One Love Manchester benefit concert, which raised money for the victims of the May bomb attack at Grande's show.

Speaking on the Rolling Stone podcast in August 2017, Liam raised hopes of an Oasis reunion, saying, "We’re better together." But by March 2018, things had soured again, as Liam blamed Noel's wife Sara McDonald for the band's separation. "She’s the reason Oasis is no longer," Liam tweeted, as the Guardian reports. In July, however, Liam told Noel via Twitter, "I forgive you," adding, "now let's get the BIG O back together".

Still with me? We're almost up to date. After rumours of Liam's headline Glastonbury slot began to spread, a fan asked the singer on Twitter whether Oasis would reunite. Liam's response? "I'm up for it anytime the other fellas Mrs won't let him as it's to rowdy for her she's app POSH." It's not, of course, a new move to blame a singer's wife for the breakup of a band — the misogynistic accusations surrounding Yoko Ono and her suppposed role in the Beatles' demise are still going strong.

I've contacted representatives for both Liam and Noel for comment, but haven't yet received a response. In the meantime, Oasis fans will just have to wait — and hope that the Gallagher brothers resolve their very public feud in time for Glastonbury.