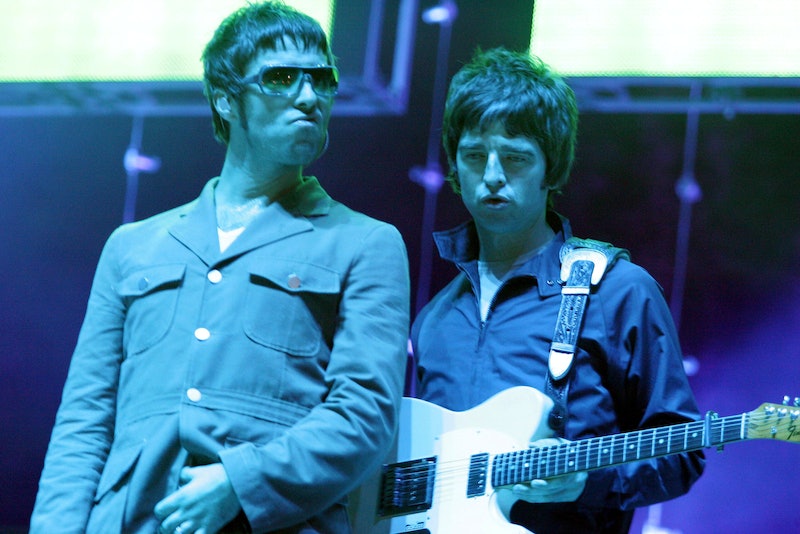 Glastonbury Festival 2019 has arrived, and with it comes a staggering lineup of artists who represent the very best of music. As thousands of festival-goers throw on their wellies and set up camp, artists such as Kylie Minogue, Janet Jackson, and Stormzy will get ready to perform on some of the world's biggest stages — and one act many fans are looking forward to enjoying is Liam Gallagher, who's presence at the festival has sparked rumours of a potential Oasis reunion. But will Oasis reform at Glastonbury?

As it stands there has been no announcement in regards to an Oasis reunion at this year's Glastonbury Festival. I have reached out to the Gallagher brothers representatives, and will update with any information once it becomes available. Although nothing has been confirmed, there are still hopes that an on-stage reconciliation between the rockers could take place — and according to the Metro, bookies are currently offering odds of 4/1 that Liam Gallagher will perform with Noel at some point during the 2019 festival.

As reported by The Sun, Liam Gallagher is scheduled to perform his Glasto 2019 set on Saturday, June 29, and rumours that the "Morning Glory" singer will join The Killers on-stage at some point over the weekend have begun to emerge. Speaking to the newspaper, one source revealed "Liam is a big fan of Brandon and the lads and has got on stage with them a few times. But they got talking about doing a proper bit together, so have been speaking about doing something on Saturday night. As ever with Liam, things go right down to the wire, but both sides are keen to do something and Liam is on directly before The Killers."

Glastonbury organiser Emily Eavis has previously expressed her interest in convincing Liam to headline at the festival, reports The Sun, however the former-Oasis frontman declined, and believes that he needs a few more years as a solo artist under his belt before headlining. Speaking to the newspaper, one source said, "Oasis have headlined twice before but Liam didn’t want it to just be a ­tribute act — he wants to headline the festival when he feels he can play enough of his own music to justify it. Organisers were a touch surprised but he was still happy to be second on the bill."

Despite claiming that he's "always enjoyed Glastonbury," Liam has previously revealed that he did not enjoy his 2004 set — in which he performed alongside his famous brother. According to NME, Gallagher told BBC 6 Music’s Matt Everitt, "I’ve always enjoyed Glastonbury. There’s only one that I didn’t and that was when I wore a white jacket. I didn’t enjoy that because that was when I’d first started using in ears [monitors to hear the music] and it’s spun me out for 15 years. I’ve only finally took them out so I’m kind of getting back to normal. I hated that gig, man."

You can watch Liam Gallagher's 2019 Glastonbury set on both BBC One and BBC Two on Saturday, June 29.