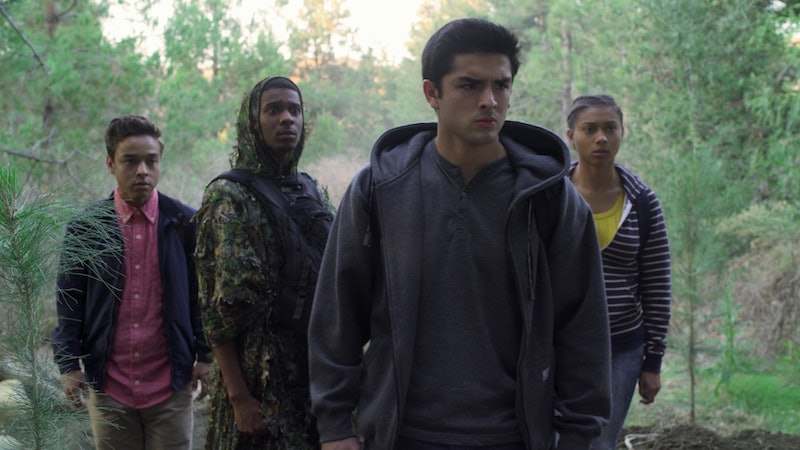 Spoilers ahead for the finale of On My Block Season 3. Although there's no news so far on whether On My Block has been renewed for a fourth season, series co-creator Lauren Iungerich wants to keep the momentum from Season 3 — out Wednesday, March 11 — going. "It's not final," she tells Bustle. "I mean, I have no news, but we are very hopeful that there will be another season." So for now, fans can cross their fingers that On My Block will return for Season 4, despite that seemingly conclusive ending.

Indeed, Iungerich's sentiments are surprising, since the dramedy could easily have ended with the two-year flash-forward that concludes Season 3. After Spooky (Julio Macias) has Cuchillos killed and makes peace with their rival gang, 19th Street, he retires from the Santos altogether and becomes a family man, just like he wanted. The kids, meanwhile, have grown both up and apart. Jamal (Brett Gray) apparently becomes a football athlete, since he's shown wearing a red Freeridge jersey and surrounded by his teammates. It's unclear how exactly this happens, because he was so averse to sports in Season 1, but perhaps Season 4 will fill in the timeline gaps — or maybe it will pick up right where we left off.

The two year flash-forward also shows Jasmine (Jessica Marie Garcia) and Ruby (Jason Genao) still dating, while Monse (Sierra Capri) has all but forgotten her old crew at her fancy private school. Cesar (Diego Tinoco), meanwhile, has become the new head of the Santos, and we see a shot of his back, now tattooed with a sizable Santos cross, as he oversees a beating.

While this is certainly tragic, it seemed inevitable that Cesar would fall in with the Santos eventually. It's been hinted at since Season 1, when Monse begged him not to get involved with his brother's gang. And despite repeated promises that he wouldn't, audiences saw Cesar slipping further and further into gang life — much of which he did in order to protect his friends.

Spooky's happy ending aside, Season 3 doesn't end on a particularly positive note, but it is realistic. Childhood friends drift apart, as sad as it can be. The good news, however, is that Monse did manage to get out of Freeridge and receive a good high school education. Ruby and Jasmine seem similarly happy, while Jamal is likely just trying to fit in and make his dad proud.

The only true loose end is the fact that they still haven't found Lil' Ricky. Knowing Jamal, he's not going to rest until that mystery gets solved — whether his friends help him or not. And for that, On the Block needs to come back for at least a fourth and final time.