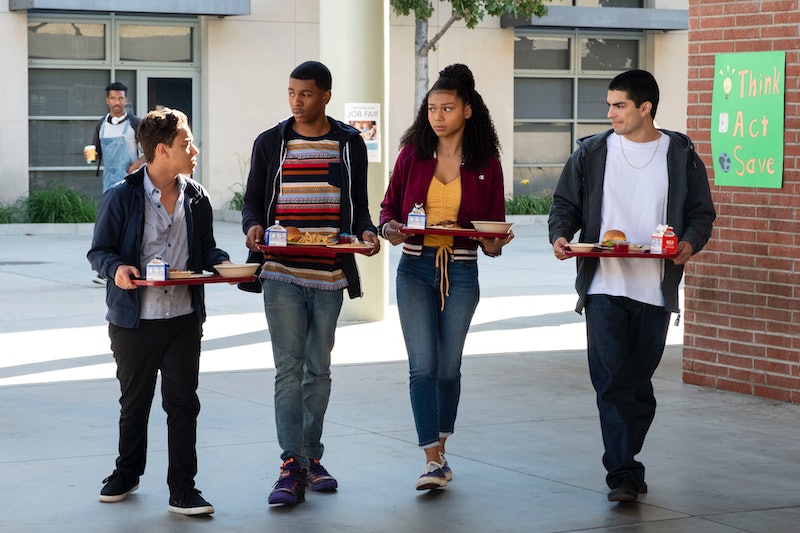 After the second season's shocking finale cliffhanger, fans of the notoriously thrilling series are definitely itching to find out if On My Block will return for Season 3. The bad news? There hasn't yet been an announcement from Netflix regarding the show's future. The good news? The people behind On My Block definitely have plans for a third batch of episodes.

Update: On My Block has been renewed for Season 3, according to The Hollywood Reporter.

Earlier: According to TVSeriesFinale.com, there's no word either way on if On My Block is renewed or cancelled. And due to Netflix's infamous secrecy surrounding its viewership numbers and ratings, it's pretty hard to guess what decisions will be made. "Unless they decide to publicize viewership statistics, it is difficult to predict whether Netflix will cancel or renew On My Block for Season 3," reports TVSeriesFinale.com. "Very few scripted Netflix series survive to see a third season so that’s not a good sign."

But the show's plot can't end on such uncertain terms, right? We have to find out who's behind that stunning kidnapping. Co-creator Lauren Iungerich talked to TV Guide about the finale, and she knows you want answers. Luckily, she says there's definitely a roadmap for how she wants to proceed. "We have an awesome story planned for Season 3, if we get a Season 3," she told the outlet. "I like to know where I'm going before I start writing and so I always try to figure out the next season before I start the season I'm working on. I think what we have in store is a fun, surprising reveal in Season 3."

When asked about how likely she realistically thinks a renewal is, Iungerich was hopeful, particularly thanks to the support she's felt from viewers. Twitter is basically constantly buzzing with fans gushing about the show and itching for more episodes, and

"Netflix loves this show, we love this show, we're hopeful we'll get another season. I mean, that's why we make the show is to continue making the show," Iungerich said in the same interview. "I feel as good as I can feel waking up at two in the morning and going on Twitter and seeing that we were trending in the top position and knowing last year that we were the most binge-watched show of 2018. I'm hopeful that the audience is going to take us home and that's what drives content on Netflix, the audience. So I feel hopeful. We love our fans."

Critics seem just as smitten with On My Block as its creator does, which could be another good sign when it comes to the dramedy's longevity. IndieWire's Liz Shannon Miller said On My Block continues to stand out in terms of production value and writing in a way that other young adult series' don't usually achieve. "The cinematic look, the experiments with form and function, and the twisty, character-driven writing aren’t perhaps going to set the Emmys on fire, but offer up a significant advantage over what you might expect from a series targeting this age group," she wrote.

On My Block hasn't just been hailed as well-made show in its second season — it's also a genuinely important one. Trey Mangum's Shadow and Act review praised its depiction of big issues, like mental health, among communities that are too often overlooked. "Films and television shows typically don’t talk about PTSD in this context (especially focusing on young Black and Brown characters), so it is great to see the depiction in this space," he wrote of Ruby's story arc in particular.

It feels like everyone is rooting for On My Block to return — it'd definitely be sorely missed if Netflix chose not to bring it back, particularly with the characters' fates still so up in the air. For now, though, all we can do is wait and see.