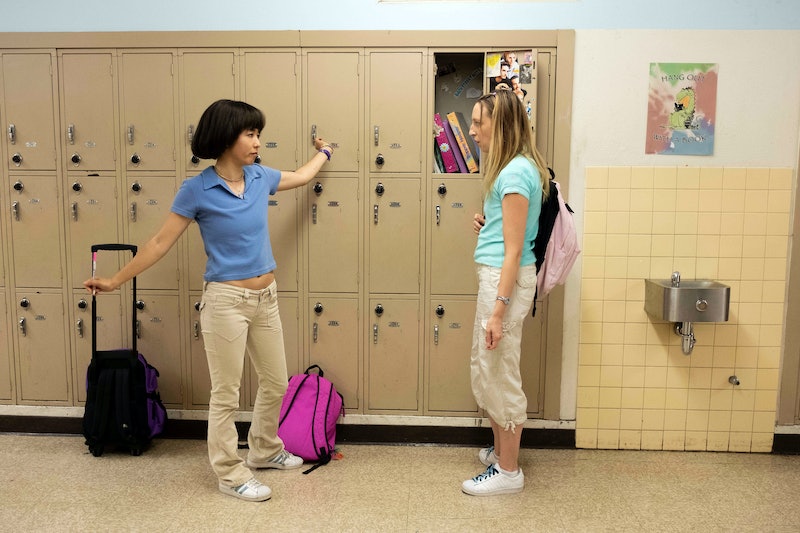 Whether corny or poignant, raunchy or straight-laced, TV is currently saturated with coming-of-age stories: grown-ish, Big Mouth, the newly debuted Sex Education. But Hulu's PEN15, premiering Feb. 7, puts a spin on the genre that hasn't been seen before. It's unclear if PEN15 will return for Season 2, but the comedy certainly won't be forgotten — no matter what its future holds.

Update: Hulu has renewed PEN15 for Season 2, according to a press release.

Earlier: The show stars Maya Erskine and Anna Konkle (who also created the series) as teen versions of themselves trying to navigate the muddy waters of middle school. And yes, you read that correctly: two grown women portray adolescent caricatures of their own past selves, while actual middle school students fill the rest of the cast. To say that the premise paints a funny picture is an understatement.

Per Deadline, Hulu ordered 10 episodes of PENI5 after an 11-minute presentation by Erskine and Konkle sold the company on the premise. That report, published in August 2018, appears to be the last news about the show's pickups. Though no second season has been ordered just yet, reviews of PEN15 have been pretty favorable, and there are some big names behind the show that'll be lobbying for its success.

According to the same Deadline piece, executive producers of PEN15 include Andy Samberg, Akiva Schaffer, and Jorma Taccone of the Lonely Island. And the company behind the show — AwesomenessTV — has already had success with other Hulu shows like Freakish and All Night.

Judging by coverage of PEN15, the 2000-set comedy has already struck a chord with critics. Jen Chaney said in her Vulture review that she hopes there are several more seasons following the first, and that its throwback vibe will mean a lot to anyone who grew up in the same era as the show's protagonists.

"With its attention to the details of American life in the year 2000, idiosyncratic protagonists, and mix of brutal honesty and gentle poignance, PEN15 is an ideal blend of Freaks and Geeks and Napoleon Dynamite," Chaney wrote, adding that "the show is so relatable and well-written that even if you’re too old or too young to have hit puberty around the time of Y2K, you're still likely to be charmed by it."

Decider's Lea Palmieri also praised PEN15's dedication to its aesthetic, and drew parallels between the freshman series and another side-splitting comedy that's made a splash in recent years. "Erskine and Konkle are early frontrunners for the year’s best TV besties, making a pact to try everything at the same time from substances to sex stuff, with some of the exploring? experimenting? adjusting? to their changing bodies playing out like a live action Big Mouth scene," she wrote.

There are other critics who weren't quite as favorable — Tim Goodman wrote for The Hollywood Reporter that despite strong leads and unrelenting realism, PEN15 feels to him as "more skit than show." "If not for the all-in efforts of Erskine and Konkle ... the series would be instantly more forgettable," he wrote. That may not be a glowing review, but it does show that even among those who aren't completely sold just yet, Erskine and Konkle are definitely nailing the tone.

It's too early to tell if PEN15 will return with another batch of episodes, but it's clear that the team behind it has an undying wealth of dedication. Fans will be waiting on an announcement for a little while longer, but at least they'll have 10 nostalgic episodes to keep them company while they do.