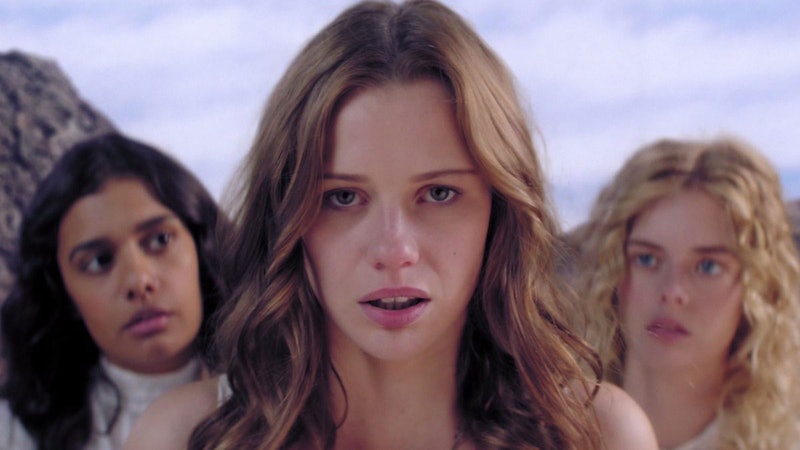 Since Picnic at Hanging Rock premiered on the Beeb, has anyone else taken to flouncing around in white gossamer dresses and started practicing haunting stares in the mirror? Just me? Oh well. Nevertheless, I'm devastated that the final episode of the short-lived series is airing on Wednesday. But will Picnic at Hanging Rock have a sequel?

I reached out to the BBC to find out — I mean come on, Series 2 needs to happen. However, a spokesperson did not comment. If you're a total stan like me, then there may be some bad news. You see, the TV series is based on Joan Lindsay's novel Picnic at Hanging Rock, and if the OG ending is anything to go by, a second season is probably out of the question. (Beware Picnic pals, there’s spoilers for the end of the series below.)

The dreamy, ethereal series follows the sudden disappearance of three Australian schoolgirls and their governess at a school picnic, and the town's attempts to figure out what happened to them. As the search drags on and bears little fruit, it starts to take a major toll on many of the characters: including widowed headmistress Hester Appleyard, played by Game of Thrones' Natalie Dormer. If you’ve already gone full steam ahead and binged all six episodes on Amazon Prime, you'll know know what I mean.

As with the original book by Lindsay and the Peter Weir film adaptation, the girls’ disappearance is never solved. I haven’t been this frustrated since I watched Inception for the first time. And the second time. And the third time.

Larysa Kondracki, the showrunner and director of several episodes, explained she wanted the TV series to leave viewers with so many unanswered questions. Speaking to The Wrap, she said it's "because that’s six hours of your life" and so it's better to let people come up with their own ideas. "I also want you to argue about what happened," she continued, "and that’s kind of half the fun about the show."

The series’ end is true to the spirit of the original book, where the actual facts of the disappearance matter less than the actual story and characters themselves. If I haven’t already hammered that fact home, the original author Lindsay basically laid it out as plainly as she could in her novel.

She wrote, "Whether Picnic at Hanging Rock is fact or fiction, my readers must decide for themselves. As the fateful picnic took place in the year nineteen hundred, and all the characters who appear in this book are long since dead, it hardly seems important."

Lindsay was famously cagey about revealing whether or not Picnic at Hanging Rock was based on a true story, probably to keep people from fixating on the ending too much. In fact, the director of the 1975 film adaptation Weir met with her and even he apparently didn't have any luck finding out how it all actually played out either. Lindsay’s publicist flat out told Weir prior to the meeting that he was “told not to ask whether the story was true and was wary of asking about the ending," according to New Republic. (Lindsay eventually revealed it was based on a dream she had, as reported by Daily Motion.)

Still, that hasn’t stopped people from coming up with their own theories, with some venturing as far as alien abduction to explain away the girls’ sudden disappearances. As far as the new BBC series goes however, I’m going to stay firmly on planet earth and go with the jaw-dropping theory that Kondracki put forward. (It’s a little wild and she even had to go as far as to preface that it was "cockamamy" when talking to The Wrap about it. "I think none of [the vanished girls] existed. I think it all happened in Appleyard’s head," she said.

Stay with me, here. This is actually a pretty cool hypothesis.

"She was a woman who was robbed of her own ability to form the role that she wanted to be. Her life was stolen from her by this love/abuser/whatever Arthur is,” Kondracki continued.

"So I think all of these women, all of these girls are different versions of the kind of woman that she wanted to be and it’s only when she realises, a little bit too late, that the pretence of what she became was wrong. And really, she probably just needed a good hug or a good shag and a little bit of therapy — and then she jumped off a cliff. So I think it all happens in her head."

It’s not exactly closure, but it’s something. At this point, I’ll take what I can get.

The final episode of Picnic at Hanging Rock airs on Wednesday (August 15) at 9 p.m. on BBC 2. It's also available as a box set BBC iPlayer as well as in its entirety on Amazon for Amazon Prime members.

More like this
The Bestselling Novel 'The Doll Factory' Will Be Adapted Into Thrilling TV Series
By Catharina Cheung
'The Timewasters' Creator Is Back With A New Boarding School Dramedy
By Darshita Goyal
WAGatha Christie The Series Is Officially... Coming To TV
By Maxine Harrison
A BGT star & A Football Legend Have Joined The 'Strictly' 2022 Line-Up
By El Hunt and Sam Ramsden
Get The Very Best Of Bustle/UK