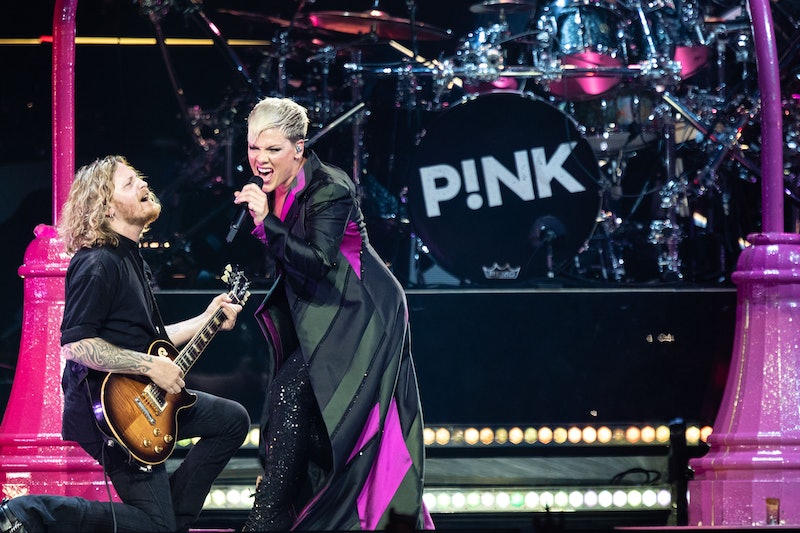 The longevity of Pink's career appears to know no bounds, and over the past couple of years the U.S. singer has gone on to enjoy continued success with the 2017 album Beautiful Trauma, and the hit single "What About Us" Unsurprisingly, fans are wondering if they will get a chance to see the megastar live at some point in the near future. So, will Pink tour the UK in 2019?

As luck would have it, Pink is indeed going on tour, and the UK dates have already been released. According to the singer's official website, the UK leg of her Beautiful Trauma world tour will kick off at the Principality Stadium in Cardiff on June 20. The shows will then continue on with two dates at Hampden Park in Glasgow on June 22 and 23, the Anfield Stadium in Liverpool on June 25, and conclude with two shows at the Wembley Stadium in London on June 29 and June 30. The world tour first began over in the U.S. on March 1 last year, and will eventually conclude in Rio de Janeiro, Brazil, later in 2019.

Tickets for what promises to be a spectacular show are available to purchase on Ticketmaster.

In addition to touring the world, Pink is also set to become the first international star to receive the Brit Awards Outstanding Contribution to Music accolade. As reported by Variety, the "Get The Party Started" singer will be presented with the special award during this year's Brit Awards ceremony, which is due to take place on Feb. 20 at London's O2 Arena. In a statement, the U.S. star reacted to the exciting news. She said "Since the beginning of my career, the British fans have been some of the most fierce and loyal in the world. I am humbled to receive this honour and be in the company of an illustrious group of British icons."

Previous recipients of the Brit Awards Outstanding Contribution to Music award include the likes of David Bowie, Sir Elton John, and Sir Paul McCartney, so the singer is certainly in good company. And this isn't the first time Pink has been recognised by the awards ceremony, as she previously won a Brit back in 2003 for Best International Female Solo. In total, the singer has been nominated for a Brit eight times. According to NME, this year marks the first time the Brit Awards committee have opened up the Outstanding Contribution prize to international acts who have achieved long-term success in Britain. The chairman and CEO of Sony Music UK and Ireland, Jason Iley, who also happens to be the chair of the Brit Awards, described Pink as being "a trailblazer, a phenomenally talented singer and songwriter, and truly one of the greatest artists of our time," NME reports.

Iley then went on to say:

"It is a real pleasure to honour her at this year's BRIT Awards with the Outstanding Contribution to Music Award. With her remarkable career spanning nearly 20 years, Pink is one of the most successful artists in the world, consistently releasing multi-million-selling albums and selling out tours all over the globe. I am really excited to welcome her back to The BRITs and to recognise her prodigious success."