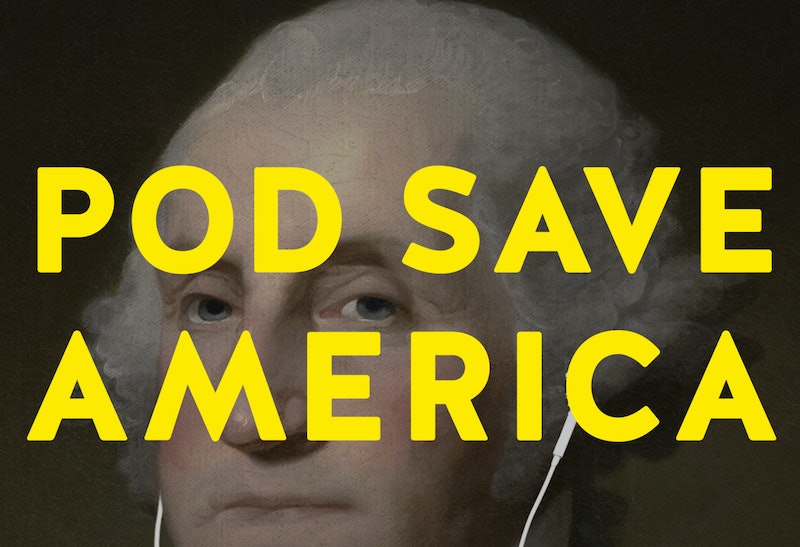 Podcasts are absolutely everywhere right now. If you have an interest, there's a podcast for that. And what could be more interesting than the cray AF world of politics? It's fair to say that the political situation in the U.S. is about as interesting as it gets RN, but it's also very confusing. This is where political podcasts like Pod Save America come in. But will Pod Save America tour the UK in 2019?

Well, TBH, there are no UK dates scheduled right, and the Pod Save America podcasters are just about to embark on a ha-yuge stateside tour, so it will probably not be on the cards for a while. However, never say never, as the crew have done shows in the UK before, so it's not an impossible dream to hold onto.

Described by the New York Times as "the left's answer to conservative talk radio," Pod Save America is hosted by Jon Favreau, Jon Lovett, Dan Pfeiffer, and Tommy Vietor, all former aides to Barack Obama (swoon). And these guys are pretty dang astute when it comes to what the hell is going on in politics at this point in time. Which is, like, a whole bunch.

The podcast is produced by Crooked Media (a media company founded by Favreau, Lovett, and Vietor), and it now reaches one and a half million Americans per episode and has had more than 120 million downloads worldwide. Pod Save America has also sold out tours across the U.S. and Europe. Good job, guys.

Educated and experienced guests add that extra pinch of pizaz to each episode, with the hosts having interviewed famous faces (or voices) such as Hilary Clinton, Elizabeth Warren, and Seth Meyers, along with a whole lot of other politicians and commentators.

During each show, the hosts seek to put across the calming and positive message that was intrinsic to their old boss Obama's presidential campaign, his time in office, and his career as a whole. They give listeners real talk in dark times, and provide hope for the disaffected people of our time. Their sense of humour and ability to simplify what is a seemingly endless barrage of negative information makes this show a must for people who want to get a grasp on American politics.

Favreau spoke to Rory Carroll at the Guardian about why the podcast is such a success.

"The podcast began because we're four really close friends – the chemistry is the four of us," Favreau said. "It's very us. For no other reason other than it was the easiest way to go – just be ourselves. When we started, we didn't know how to do a podcast so just talked like we usually talked. It was like, what’s the worst that can happen? We're not running for office. So we just speak our mind".

Laughter through uncertain times is always going to have huge universal appeal. Hopefully Favreau, Lovett, Pfeiffer, and Vietor (plus the pod's dogs, Pundit, Leo, and Lucca) will come over our side of the pond and serve some realness soon.