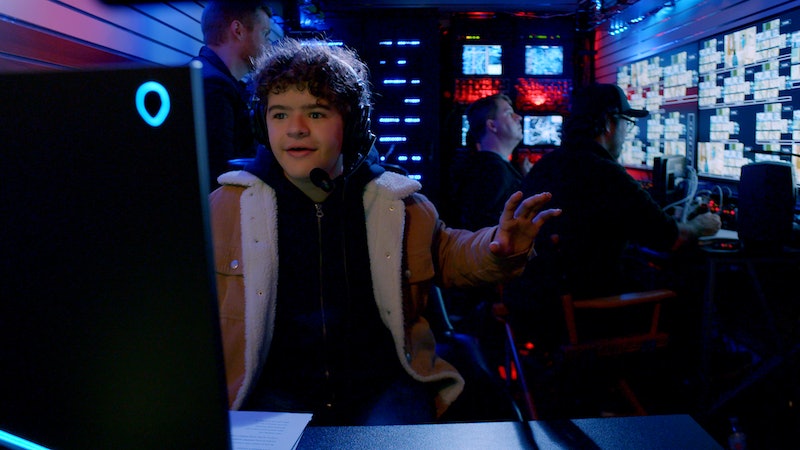 Whether or not Netflix's new hidden-camera prank show, Prank Encounters, returns for Season 2, there are already a lot of eyes on the series — and not necessarily for good reason. The show, hosted by Stranger Things' Gaten Matarazzo, recruits unknowing participants for odd jobs, only to spend the day terrorizing them with creepy gags like haunted teddy bears, masked killers, and alien invasions. Matarazzo always reveals himself before any physical harm or violence comes to the subjects, but he manages to elicit enough scares for anyone who likes a bit of schadenfreude with their Halloween programming.

However, not everyone finds the idea funny. When Prank Encounters was initially announced in June, people were quick to accuse the show of taking unfair advantage of job-seekers. In response to the criticism, Netflix released a statement to Time reading, "The pranks in Prank Encounters are spooky, supernatural, and over the top, and everyone had a great time. All participants came in with the expectation this was a one-day, hourly gig and everyone got paid for their time."

Netflix declined to comment further when reached by Bustle, but a little bit of controversy certainly hasn't stopped them from renewing contentious shows in the past (see: 13 Reasons Why), so perhaps the backlash won't affect whether or not Prank Encounters gets a second season too heavily.

Whatever the case, if you love watching unsuspecting people navigate terrifying situations, Netflix has plenty of other shows to keep you occupied while you wait for more news — or just want an alternative, non-controversial option.

Derren Brown's The Push is less interested in scaring people and more interested in testing the limits of what people are willing to do. The TV special, which is as much a prank as it is a social experiment, follows various unsuspecting subjects working at a fancy event, where actors have been tasked to manipulate them into committing (fake) murder. If you watch Prank Encounters and think "I'd like to see these subjects placed under even more emotional stress," then The Push is the show for you.

Flinch is, in practice, a game show, but with a twist: it puts its contestants through increasingly outlandish challenges involving electrocution, things being hurled at their heads, and farm animals eating things off of them. Whoever can hold their nerve the longest wins. It's not scary or spooky, but it is pretty absurd.

If you like prank shows but need to take a break from seeing people put into precarious situations, allow magician Justin Willman to bring some whimsy into your life. The street magician uses his magic to "prank" others, but more so to make them laugh — not scare them senseless. If you need a more playful chaser after marathoning Prank Encounters, cue up Magic For Humans.