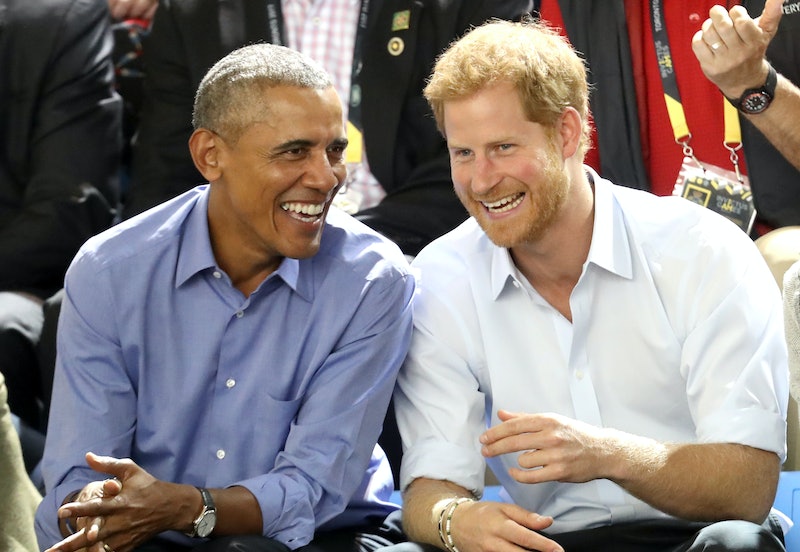 For Prince Harry and his brand new fiancé Meghan Markle, the wedding guest list isn't just an issue of sorting friends and relatives, it's also a matter of state. It's hardly a surprise, then, that Prince Harry and Markle's wedding guest list might include an American president — but it most likely won't be the current one. Instead, Barack and Michelle Obama will likely be invited to Prince Harry's wedding, while Donald and Melania Trump will probably not receive an invite.

Some of the problems are logistical. The U.S. president requires constant security, and a lot of it. In the context of the huge celebrations surrounding a royal wedding, that security would be extremely expensive and difficult to provide. That was at least one of the reasons why Barack and Michelle Obama weren't invited to Prince William and Kate Middleton's wedding in 2011.

With Trump, however, there are a couple of additional reasons why the royal family may not request his presence at Harry and Markle's wedding. For one, huge protests delayed a planned state visit that Trump was supposed to make to London earlier in 2017. Markle also publicly criticized Trump, long before the world knew that she and Prince Harry were together.

In an interview with Larry Wilmore on The Nightly Show in 2016, Markle called Trump "misogynistic" and said that if he was elected president, she would consider staying in Canada, where she had been living to film her television show Suits. The royals typically don't make their feelings about politics known, so Prince Harry hasn't spoken publicly about his feelings for Trump. But Business Insider reports that both he and Markle privately criticize Trump and his policies. Prince Harry reportedly thinks that Trump is a danger to human rights, although Kensington Palace denied that report.

Back in 2016, the Obamas sent the Queen and Prince Harry a hilarious Invictus Games challenge, in which a military official standing behind the Obamas mimed a mic drop. When Prince Harry and the Queen responded, Harry had his own turn with the mic drop.

Michelle and Harry also have their own relationship, most obviously evidenced by their joint visit to a school in Chicago in October, where they surprised some lucky schoolchildren. Also on his trip to Chicago, Harry attended the Obama Foundation's inaugural summit, which could indicate both that he supports the foundation's mission and that he likes the Obamas personally — as if that wasn't clear enough already.

But Prince Harry's position in the line of succession — sixth, specifically — most likely means that he won't be under quite so much pressure as his older brother was at his own wedding. Canadian Prime Minister Justin Trudeau will almost certainly be invited, along with his fellow leaders of Commonwealth countries.

But the United States isn't part of the Commonwealth, so there's no hard and fast rule that Trump should be invited. Judging by the recent past — that is, Will and Kate's wedding — it would actually be out of the ordinary to invite Trump. And assuming that Markle's opinions on the current president haven't changed, she probably won't be sorry to obey that precedent.