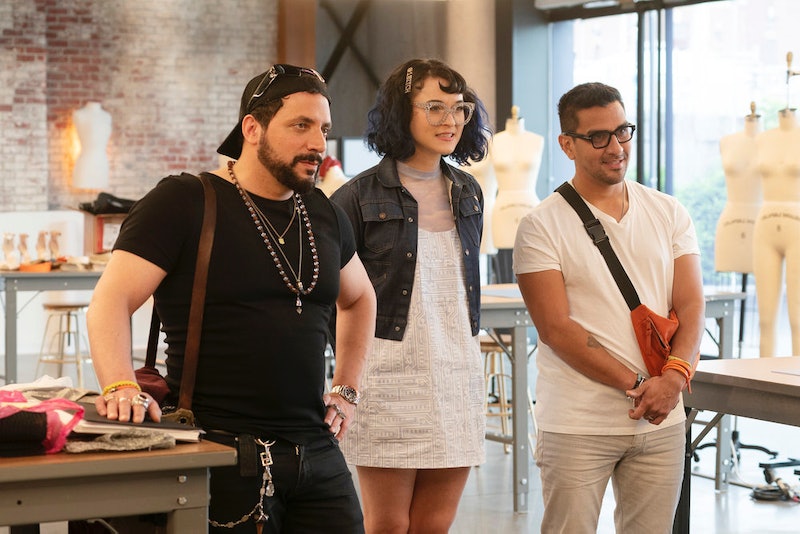 Project Runway looked a little different this year with the departure of longtime host Heidi Klum and beloved mentor Tim Gunn. In fact, only judge Nina Garcia remained of the reality competition show's original staples. Supermodel Karlie Kloss filled Klum's high heels, while former Project Runway champion and current fashion powerhouse Christian Siriano took up Gunn's helm as mentor to the designers. So how did this new experiment pay off? Will Project Runway return for Season 18? Or did the iconic series lose its magic when it took on a new look?

There's no word just yet on if Bravo has renewed Project Runway, but they just took back control of the iconic series after it aired for years over on Lifetime, so they probably won't let it go down without a fight. And the people behind Project Runway's new life have been optimistic about where the revamp could lead. "We’ve had extraordinary talent come to the table," producer Jane Lipsitz told Variety. "The prize money has more than doubled. A lot of people have told us ‘I never considered being on the show but I’m coming for this season.'"

Personally, I think this season holds its own alongside seasons past, and there are plenty of reasons Bravo should keep it alive in this new version.

Siriano Is Killing It As A Mentor

Don't get me wrong, I love Tim Gunn with my whole entire heart, and would've gladly watched him worriedly mentor designers for seasons to come. But Siriano comes at the job from a fresh perspective — he's someone who's been in the cpntestants' shoes, and who has more intimate knowledge on the actual craft than Gunn ever did.

Gunn was a worthy and knowledgeable consultant, but Siriano makes an entire career dressing A-list celebrities every day. Siriano is easily the biggest success story to ever come out of Runway, and watching him give designers real, concrete advice on how to craft their looks has been deeply interesting.

The Talent Has Been As Good As Ever

Lipsitz' comment rings true — extraordinary talent has been featured this season. The Project Runway well is not showing any signs of running dry. There's really no telling how many worthy designers around the world could be waiting for their chance at a future season's title, and it'd be a shame to deprive them of a national platform and the opportunity to jumpstart their lines.

The Judges Are Insightful

In addition to Kloss and Elle editor-in-chief Garcia, this season brings fashion designer Brandon Maxwell and former Teen Vogue editor-in-chief Elaine Welteroth to the judges' seats. Though I do wish that there was one more judge with hands-on design experience like Maxwell, this panel is thoughtful, taking its time to examine every stitch up close, and definitely holds a ton of clout in the industry.

People Are Definitely Still Talking About It

Whether they're upset about their favorite designer being sent home, gushing about how much they love a certain look, or gossiping about the drama between designers, Twitter is basically always lighting up with Project Runway content when the show airs. Fans don't seem to have let the network change or the cast shake-up sway them from becoming invested in this season, and they seem eager for more should it continue.

It's Evolving With The Times

Perhaps most importantly, Project Runway is modernizing, and no, I don't mean in the way that America's Next Top Model attempted to when it integrated social media, fan voting, and confusing scoring metrics into every aspect of the show. Runway is actually recognizing that the fashion industry is becoming (or at least needs to become) more inclusive, and is showing those changes in ways that make sense.

Not only is Siriano famous for creating looks for all different shapes and sizes of bodies, but the models this season who don the Project Runway designers' looks range in size from small to plus. The models are typically assigned to designers at random, especially early in the season, so designers simply have to know how to work with different kinds of bodies. The show even has its first transgender model this year.

The judging panel has also brought up issues like cultural appropriation in fashion, a term I can't remember hearing mentioned with any regularity in earlier seasons, while picking apart the designers' garments, and scolded the rare designer who takes issue with designing for a bigger body. Essentially, Project Runway is embracing fashion's changing values, making it more accessible to everyone, and doing so without making the show seem like a hokey, pandering after-school special.

Project Runway doesn't seem ready to quit, and viewers don't either. Season 18 might not be a done deal, but it sure would be a nice thing to see.

More like this
We Still Have A Few Unanswered Questions At The End Of 'The Suspect'
By Sophie McEvoy
Every Celebrity From 'The Masked Singer' Season 8 Revealed Or Rumored So Far
By Gretchen Smail and Brad Witter
Wait, Is Maya Jama Confirmed To Host 'Love Island'?
By Sophie McEvoy
'Survivor' Host Jeff Probst's Salary Per Season After 22 Years Is The Real Winner
By Hugh McIntyre
Get Even More From Bustle — Sign Up For The Newsletter