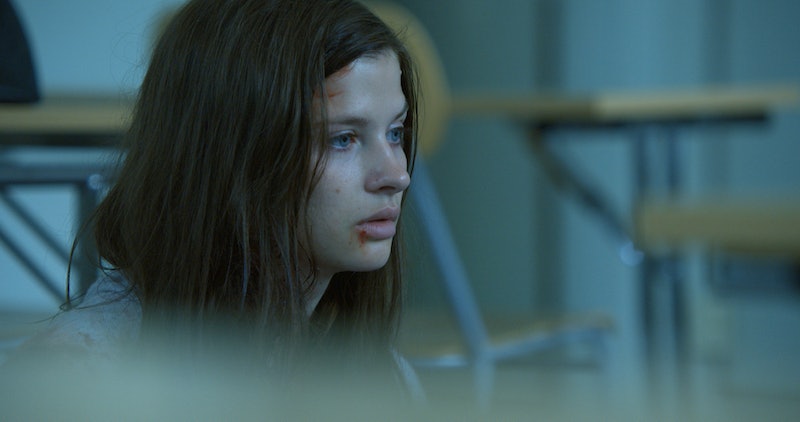 Another day, another international thriller hitting Netflix. Quicksand, known as Störst av Allt in its native Swedish language, follows a high school student named Maja who's on trial for murder after a tragedy at her school. It sounds intriguing, but will Quicksand return for Season 2?

There's not any Season 2 announcement just yet, but there are a few clues to consider as we speculate. According to Deadline, the series is based on a novel of the same name by Malin Persson Giolito, which was voted Nordic Crime Novel of the year in 2016. The book doesn't appear to be a part of a series, so if the show wants to stick to only a standalone novel as source material, it may end with one season. Of course, it could continue past the story of the book just as shows like The Handmaid's Tale and Big Little Lies have done, depending how popular it becomes. We'll just have to wait and see.

The plot itself swirls around a mass shooting in one of Stockholm's wealthiest neighborhoods, and reveals details of the day little by little, according to The Hollywood Reporter. In 2017, writer Camilla Ahlgren said she hoped the story would challenge its viewers in a timely way. "It is both a great honor and challenge to work with FLX and Netflix on Quicksand," she told THR in a statement. "I want to tell this story from the main character Maja’s perspective; her story raises questions about guilt, responsibility, punishment and redemption. It holds a mirror up to our time whilst also serving as both a suspenseful thriller and a moving love story.”

Watching a series about a school shooting might seem like a daunting — or even unpleasant — undertaking in your free time, but it's clear from the trailer that Quicksand is about much more than just the events of that day. There's a real story there, with the character of Maja trying to navigate troubled relationships and her own self-doubt. The mystery definitely seems to focus more on what Maja did, if anything, and why she did it, and only a few seconds of the trailer seem to show any actual violence at the school.

Ahlgren also wrote The Bridge, another Swedish mystery that's been a huge hit and even spawned an American adaptation, so that bodes well for the future of Quicksand if she were to want to continue on into a second season.

Last year, she gave some thoughts to Drama Quarterly about how the process was going. "I’m the head writer and we are in the middle of the writing process. We start filming this autumn," she said. "It’s a new experience for me to work with Netflix. Right now it’s quite similar in the script process, but sometimes you have to explain emotions. Then we’ll see how it ends. It’s quite similar so so far, so good."

So, while we can't know for sure just how well American audiences will take to Quicksand, there's definitely a lot of talent behind it. For now, all we can do is watch and wait to see if Netflix determines it wants another season.

More like this
Hulu’s Mike Tyson Series Is Unlikely To Return For Season 2
By Brad Witter
Nicola Coughlan Shared A Lady Whistledown Excerpt From ‘Bridgerton’ Season 3
By Grace Wehniainen, Alyssa Lapid and Sam Ramsden
Devi Is Going To Meet A “Smoldering Bad Boy” In ‘Never Have I Ever’ Season 4
By Jack Irvin and Gabrielle Bondi
The ‘Emily In Paris’ Season 3 Release Date Is Here, Plus The First Footage
By Bustle Staff
Get Even More From Bustle — Sign Up For The Newsletter