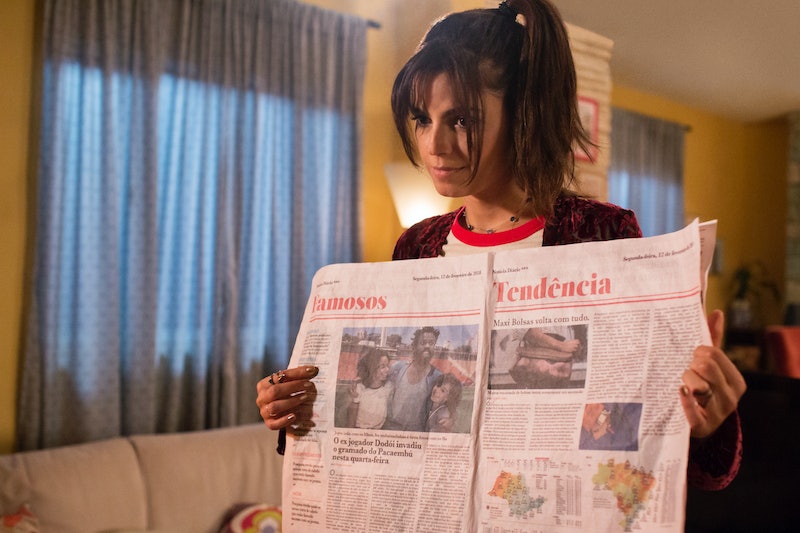 There's no doubt that the United States is producing plenty of quality series to keep up with, but there are so many international TV shows worth streaming, it would be a shame not to explore the full breadth of storytelling available. From British dramas to Swedish mysteries and comedies from Down Under, there's no end to the amazing shows you could be watching. Some of these series are in English, but just as many aren't. And true TV devotees aren't going to let a little thing like subtitles stand between them and a great show, anyway.

If you're looking to expand your TV horizons this list is a great place to start. No matter what country these series originated in, they're all available to stream stateside, which means you won't have to struggle to find them online. And there's definitely something for everyone. If subtitles aren't your thing, ease yourself into the international TV market with an import from the United Kingdom or Australia. Ready for a deeper cut? Then try a drama from India, a comedy from France, or an addictive Japanese reality show.

Not only will these shows up your recommendation game the next time a friend asks what you've been watching, they'll also expose you to different cultures and experiences from around the world. And really there's no better excuse for a streaming marathon than telling your pals you can't go out because you're having a serious cultural experience via Netflix.

Set during the golden age of the '20s, Babylon Berlin is a thriller with a a stylish flair that takes viewers into pre-WWII Germany. Police commissioner Gereon Rath's transfer to Berlin kicks off the exciting series as he finds himself immersed in a cultural epicenter with an underbelly of dark activity.

Although the show is a BBC original, Black Earth Rising is a true international series. The story takes place in Britain, Europe, the United States, and Africa, with a large portion being filmed in Ghana. The series follows legal investigator Kate Ashby whose adoptive mother's decision to try an African militia leader sends her on a journey to discover what happened to her birth family in Rwanda.

This blended family drama is perfect for fans of Parenthood. The show follows a new couple as they balance co-parenting their children together and with their exes to form a modern family unit.

Detective Kari Sorjonen transplants his family to a small town on the border of Russia in hopes of finding a new beginning. Instead, he becomes embroiled in a case that's darker than he ever could have imagined.

Set at Madrid's first national telephone company, this enthralling Spanish series follows the lives of the women who work as operators there in the 1920s. The show does a superb job of balancing the women's friendships with romance and social issues in a compelling way.

Who knew watching talent agents try to keep celebrities out of trouble could be so entertaining? This hilarious French comedy takes you inside an agency where anything that can go wrong, definitely will.

A fragile friendship between two women whose lives are going in different directions lies at the heart of this dark comedy. And it seems the harder Aisling and Danielle try to hold on to their connection, the more difficult their lives become.

Two missing children cases decades apart are connected in the most unexpected and chilling way in this spooky German drama. Set in a small town full of secrets, this show mixes time travel elements with crime drama grit to create a show that's perfect for marathoning.

Set against the backdrop of '90s era Northern Ireland, Derry Girls is a comedy about a group of teenage girls navigating life during a political conflict. Despite there being signs of "The Troubles" all around them, these teens get on with life and the messy business of growing up all the same.

If you're still missing shows like Pretty Little Liars and Gossip Girl, then you need Elite in your life. The teen drama follows three working-class teens who are dropped into a wild new world when they enroll in a ritzy private school.

Doron, a former member of the Israel Defense Force, is called out of retirement when a target he thought was dead reappears. This intense show has shades of Homeland, and it will definitely keep you on the edge of your seat.

The nightmarish Ghoul is a horror series set in a dystopian future where fascism reigns. Drawing on Arab folklore, the show mixes supernatural and sci-fi elements to tell a tightly drawn and terrifying story over the course of just three episodes.

Downton Abbey fans, this one's for you. Grand Hotel is a sweeping upstairs/downstairs drama set in a Spanish hotel during the early 20th century. It's soapy and romantic with all the gorgeous visuals a period show fan could ask for.

Filmed in English and Welsh, Keeping Faith is a unique crime drama that will immediately suck you in with its twisty mystery. The series centers on a lawyer whose husband goes missing, leading her to discover the numerous secrets he's been keeping. If you liked Broadchurch, you'll love Keeping Faith.

Where to watch: Acorn TV

Set against the wild and stunning backdrop of Tasmania, The Kettering Incident exudes eeriness right from the start. The series follows a doctor who returns home 15 years after the disappearance of her best friend. The show gets extremely weird from there, and even though it has an unresolved cliffhanger ending, it's well worth devoting a weekend to anyway.

Kim's Convenience is a sitcom grounded by the trials of the loving Kims, a Korean-Canadian family who run a convenience store. The show isn't your standard comedy though, it's wonderfully specific and respectful of Korean culture and the first-generation immigrant experience.

If you've ever dreamed about what a gender-swapped Sherlock Holmes TV series would be like, then you need to see Miss Sherlock. Set in Tokyo, the show features a female Holmes and Watson solving crimes like total bosses.

Where to watch: HBO Go

Have you found yourself wishing that Game of Thrones was a comedy? Then meet Norsemen, your new favorite show. Set in an 8th-century Viking village, this hilarious series tackles the politics and social norms of its ancient community with a sharp satirical sense of humor.

This late, great HBO series is a compelling, warmhearted series about a woman who opens a detective agency in Botswana. Soon, she finds herself a secretary, and the two women set about defying expectations together.

Where to watch: HBO Go

Set in a not so distant future where Norway is forced to stop oil production for environmental reasons, the country finds itself invaded by Russia. Russia's goal is to take over Norway's oil supply, but things get complicated fast.

Game of Thrones' Natalie Dormer is superb in this Australian miniseries about a trio of young women who go missing during a school outing in 1900. Tense and hypnotic, this six-episode series is a quick, but rewarding watch.

Created by and starring Josh Thomas, Please Like Me is the tender and funny story of a young man's coming out process and his search for love. It's also an honest exploration of the effects that mental illness can have on a family. And it's a millennial hangout comedy that co-stars Nanette's Hannah Gadsby. Oh, and there's mouth-watering food shots at the start of every episode. It's basically a masterpiece.

Rita is the original bad teacher. But she's not really bad at all, she just has a tough and no-nonsense approach to caring for her students that bleeds over into her personal life. (If you're looking for a bonus recommendation, the show's mini-series spinoff, Hjørdis, is also on Netflix.)

Five Australians find themselves confronting their core values when a boating holiday leads them to discover a group of asylum seekers in need of help. Safe Harbour is short, but effective in the way it tackles a pressing social issue of our times.

A mix of '80s nostalgia and celebrity satire, Samantha! follows a former child star as she tries to carve out a career as an adult actor. Of course, first she has to overcome her ego and the public's perception of her.

There's already an American adaptation of Sisters underway, but everyone should check out the original first. The series kicks off when a woman realizes her father used his sperm to impregnate his IVF patients resulting in her having numerous brothers, but just two sisters.

Think Real World, but better and more current, and you have Japan's Terrace House. Each season takes six strangers from different walks of life and puts them all together under one roof.

Trapped cranks the intensity up by combining a crime drama with a tale of survival as a deadly snowstorm blows into an Icelandic town at the worst possible time. The result is a taut thriller that demands to be watched in a single sitting.

Political intrigue, scandals, cryptic visions — Versailles is Game of Thrones without the dragons. And you'll hardly miss them once you dive into this soapy period drama.

There are more international TV shows available to stream than ever before, but these 29 are a terrific place to start your expanded TV viewing journey.