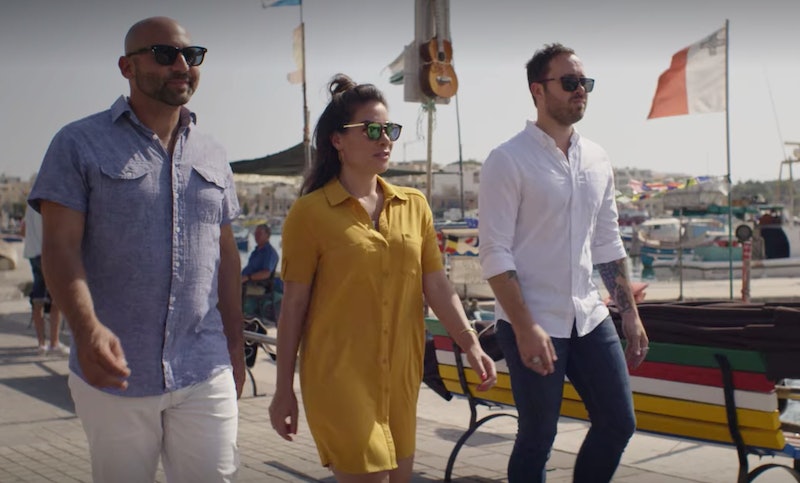 Restaurants on the Edge is equal parts travelogue and fixer-upper show. Nick Liberato, Dennis Prescott, and Karin Bohn visit some of the most gorgeous destinations in the world to spruce up failing restaurants that have world-class views but subpar food and decor. Netflix has yet to announce if Restaurants on the Edge will return for Season 3, but there's seemingly no end to potential new clients for the trio to help if the show is renewed.

Netflix shows typically take at least a month to be renewed, but Restaurants on the Edge is a little different. Per The Cinemaholic, the series was originally commissioned for 13 episodes for the Canadian channel Cottage Life, and only later was it broken into two shorter seasons for Netflix. Season 1 debuted in February, and Season 2 in May. Because it was technically one season to begin with, it could be a whole year before a third season airs.

Renewal depends on viewership, and it's possible Restaurants on the Edge's familiar formula was enough to pull in audiences. Much like Netflix's Queer Eye, each of the three hosts have a specialty that helps the restaurant owners save their struggling establishments. Restaurateur Liberato is like the Karamo of the group, helping to refocus the owners through branding and reading them mean reviews on Travelocity. (Got to get that cathartic cry somehow!) Chef Dennis Prescott helps revitalize their menus, but in this aspect he's more like Samin Nosrat in Salt, Fat, Acid, Heat than Antoni, since he also interfaces with local food sellers worth checking out. And just like Bobby Berk, designer Karin Bohn has undoubtedly the biggest job of all as she overhauls the entire restaurant to make it something chic and Instagram-worthy.

In the past, Restaurants on the Edge has traveled to places like Malta, Hong Kong, and Austria, and in Season 2 they headed to Finland, Slovenia, and Arizona. With such short seasons, the door is wide open for potential Season 3 locations. They've yet to hit up more popular destinations like Paris, London, or New York, for example, and there's undoubtedly lesser known cities and businesses that would benefit from being shown on a worldwide streaming platform.

Bohn explained to Newsweek that the producers played a major part in choosing the Restaurants on the Edge locations for Season 1. "We were specifically looking for restaurants with a great view but needed help, and places that had terrible reviews on Yelp and TripAdvisor," she explained. "We worked with some tourist boards, so we got some local input too."

This may have changed due to the show's success, though. Liberato said that while they originally had a wish list of destinations, now people are just sending him photos of their restaurants and asking how they can be on the show. It doesn't appear that there's any official application page for the show, but there is a Restaurants on the Edge Instagram. Maybe now's the time to slide into their DMs and tell them how much you love the show, and/or suggest new locations that need revitalizing?

More like this
Everything To Know About A Potential 'Bling Empire: New York' Season 2
By Gretchen Smail
'Love Is Blind: After The Altar' Season 3 Has A Release Date & It's Very Soon
By Grace Wehniainen
Everything To Know About 'Selling The OC' Season 2
By Brad Witter
Love Is Blind’s Natalie Claims Shayne Signed Up For 'Perfect Match' While They Were “Still Together”
By Brad Witter
Get Even More From Bustle — Sign Up For The Newsletter
From hair trends to relationship advice, our daily newsletter has everything you need to sound like a person who’s on TikTok, even if you aren’t.