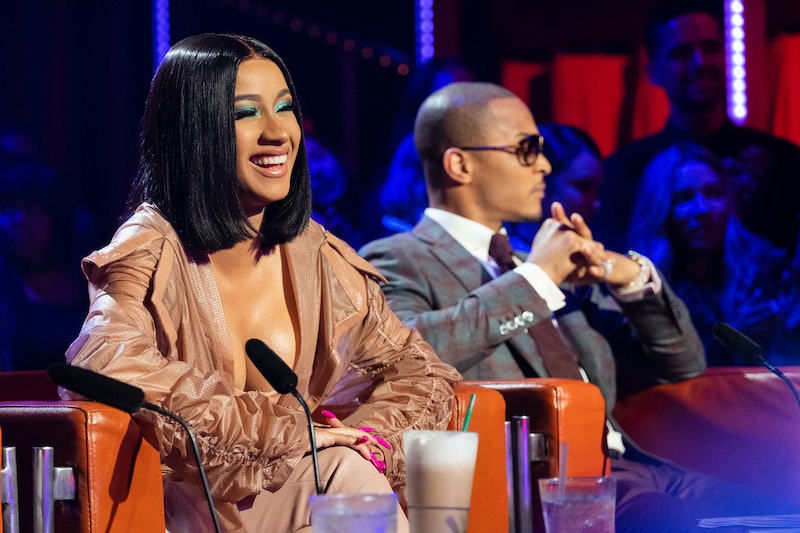 In Netflix's Rhythm + Flow, Cardi B, T.I., and Chance the Rapper scour Los Angeles, New York, Atlanta, and Chicago in the name of finding the next great hip hop super star. Now that D Smoke has been crowned the winner after just 8-episodes, and given that critics loved the series, it's entirely possible that Rhythm + Flow will return for Season 2. However, the show's future hasn't been confirmed just yet.

Netflix has yet to announce a second season, though given the fact that the first season only debuted on Oct. 9, it's possible that the digital streaming network wanted to gauge the popularity of the show before it committed to further episodes. There's also the fact that having three of the hottest rappers in the game as your hosts and mentors could be a difficult thing to arrange, timing-wise. While Cardi B has no official tour dates lined up at the moment, Chance the Rapper is heading out on tour in November, with dates currently scheduled through the end of February. In addition, VH1 announced on Oct. 17 that it's ordering a third season of T.I.'s reality series T.I. & Tiny: Friends & Family Hustle. While it's unclear when the new episodes will begin filming, that's bound to take up a good portion of his time in the near future.

Because of this, having such big names attached to Rhythm + Flow is both a blessing and a curse. Audiences are more likely to tune into a show to see their favorite stars, but those stars are where they are because they have busy and often downright hectic careers. Filming the next season of Rhythm + Flow will have to fit around that, so even if Netflix does renew the series in the coming weeks or months, it could be a while before new episodes are actually aired.

It would be a shame if it didn't return, though. After all, Rhythm + Flow is refreshingly different in a number of ways, including by taking away the audience vote element and leaving the winner up to the professionals. It also awards a $250,000 grand prize rather than forcing the lucky rapper into a constrictive and rather limiting recording contract like some other mainstream music competition show, as per The Hollywood Reporter.

Meanwhile, the 33-year old D Smoke is free to take his career into his own hands. He says he plans to invest some of his winnings and has already started some major projects, according to TV Guide. "I've been doing a lot of music," D Smoke told the publication. "I shot three music videos. Two projects were already in the works prior to the show and another completely new one is coming. So within the next three months I'll have out a seven-song EP and a 15-song album-mixtape."

Rhythm + Flow hands the power back to the show's eventual winner, right where it should be. Brandon Riegg, Netflix’s vice president of nonfiction series and comedy specials, tells Variety that contestants are "completely free to make their own decisions and strike their own deals" as the show truly cares about their artistic journey and wants to "give these contestants and opportunity to promote themselves and to be seen by means that they wouldn't otherwise have access to."

It sounds like a recipe for a successful and fulfilling relationship on both ends, making Rhythm + Flow a show worth renewing for Season 2.