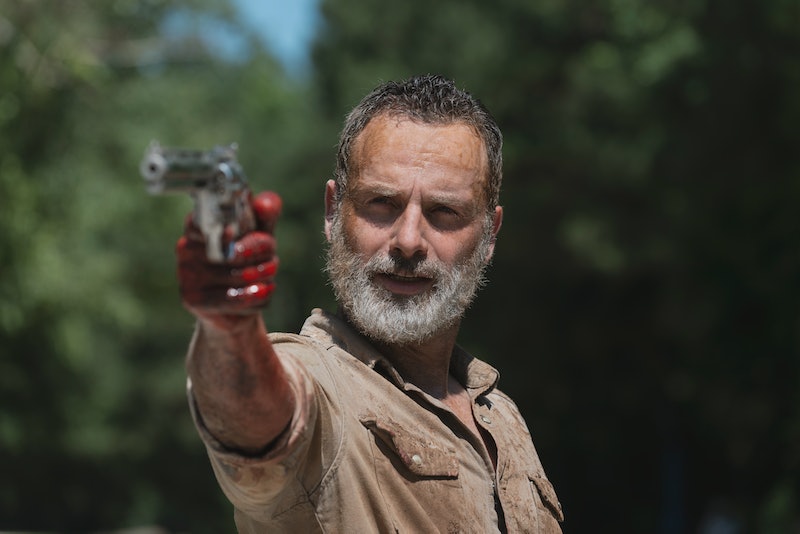 The Whisperer war officially kicked off in last week’s episode when Alpha took out notable characters like Tara, Enid, and, to everyone’s surprise, Henry during the highly-anticipated “heads on pikes” scene from the comics. The show has lost a number of important people in the past couple of seasons, so faithful viewers are hoping that some familiar MIA faces will reappear sometime soon. There’s no word on if Maggie is going to resurface sometime next season but, per Digital Spy, there is a major internet theory that has the fandom wondering will Rick Grimes return to The Walking Dead in the Season 9 finale? This speculation honestly makes a lot of sense and has some comic book material to back it up.

According to the article, several Twitter uses speculated that Eugene will hear Rick’s voice over a radio in the final moments of Episode 16. Throughout this season, Eugene has been working on restoring radio communication in hopes of connecting with distant survivors in other communities. He seemed to be relatively close to completing his project during the infamous fair and basically helped keep Rosita alive after allowing her to help him with some wiring work. It’s likely that he will test out the radio and establish a connection with a distant group to end the season on an interesting cliffhanger. This would line up well with the comics when he reached Stephanie, a member of the massive and resourceful Commonwealth community.

There has been some speculation over whether the Commonwealth is where Maggie is currently at with Georgie or if it is the mysterious helicopter group that took Rick. The former seems more likely since fans have spotted a Commonwealth windmill at the Hilltop in previous episodes. And, if the Hilltop has been in contact with the Commonwealth, then it wouldn’t make sense for them to pick up Rick’s body without informing one of his loved ones.

So, the group that Rick is with has to be a new community created for the TV series. The show often puts interesting twists on the comic storyline to keep things fresh, so it would be interesting if Eugene ends up contacting Rick’s current residence instead of the Commonwealth. It would be a great way to gear fans up for the movies and give them further confirmation that Rick is still alive six years later.

A Rick revelation in the Season 9 finale would also set things up for Michonne’s next big arc. Actress Danai Gurira will exit the series in Season 10, so it would make sense for Michonne to set off on a journey to look for Rick. She reunited with a long-lost family member in the comics, so perhaps this will be the live-action universe's take on that story. This would help the character transition straight into the upcoming Rick Grimes trilogy of movies and lead to the Richonne embrace that we all deserve.

Hopefully, this fan theory will come true and give these apocalypse survivors a renewed sense of hope during this dark time.