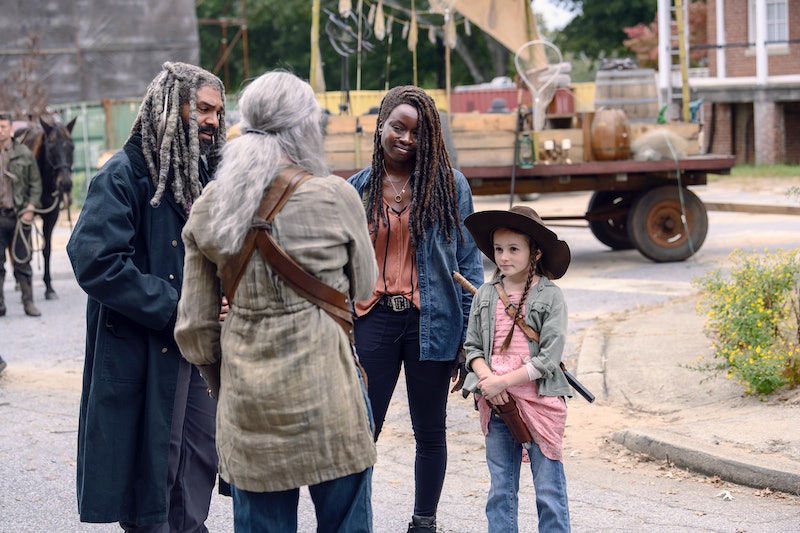 The characters on The Walking Dead are currently most concerned with the Kingdom's fair and the Whisperers, but fans might have something else troubling them. Danai Gurira will no longer be a regular character after Season 9 and with only two episodes left, it's time to start thinking about how will Michonne leave The Walking Dead. The Hollywood Reporter broke the news in February that Gurira will appear in just a few episodes in Season 10 following the Season 9 finale on March 31. THR also noted that it's likely that Gurira will join former cast member Andrew Lincoln in his Rick Grimes movies. But because that future for Michone isn't official and because Season 9 will be over in two episodes, here are some other ideas on how Gurira will exit the series.

Fans finally saw in "Scars" why Michonne has become so wary of connecting with other groups. However, Daryl and Judith helped her to accept that she needs to trust people again. So it's sad that she will be leaving the series right around the time that we're likely to get the old Michonne back. But maybe this change will lead to how Michonne will leave the series. Will her rediscovered belief in others lead her to be tragically killed? Or will it inspire her to search out other groups?

Gurira going is nearly as bad as when Lincoln left the show and will change the DNA of The Walking Dead forever. So while her exit will be far from satisfying, here are some options on how the show can do it.