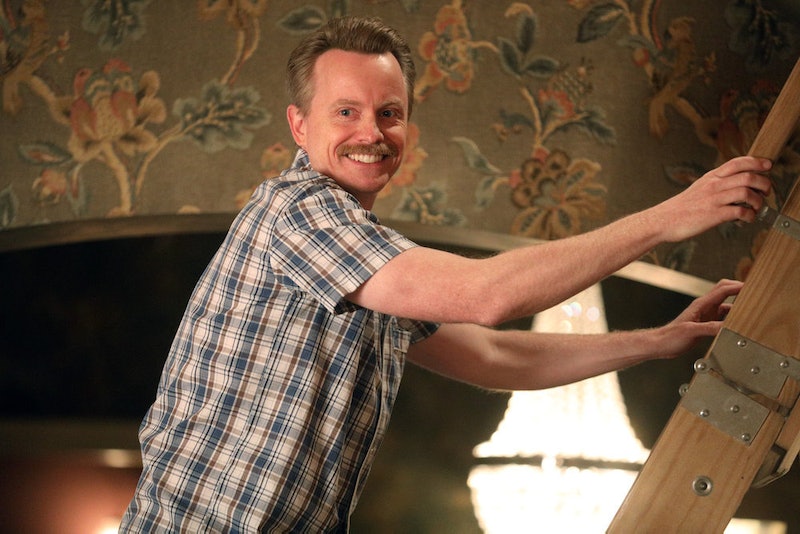 Spoilers ahead for Good Girls Season 3, Episode 8. The last time we saw Leslie, aka Boomer, on Good Girls, he was turning himself into the police in Season 2. In the show's April 5 episode, we finally learn what became of him: he got a bunch of face tattoos and went to prison, only to break out and find himself in a getaway car with Beth, Annie, and Ruby. This was apparently at the directive of Rio. Boomer thought he was being driven to safety in Canada in exchange for setting a prison fire to let some inmates escape. But Beth had different instructions: to bring Boomer back to Rio, presumably so Rio could kill him.

After handing Boomer over, Rio informed Beth that they were good, and that he would resume paying her even though she'd tried to steal from him. Feeling guilty, Beth made one last plea for Boomer's life, reminding Rio that sometimes the most loyal employees are worth giving a second chance. She was basically saying that Boomer would be more useful if he were alive and willing to do anything for them to stay that way. Rio's response? "I got different plans for him."

However, those plans may not necessarily be death. Rio is a good businessman. If he sees an opportunity in which Boomer would be useful, he'll take it. And as is the rule on every TV show: no body equals no death. Until we see Boomer actually die, he's probably still alive.

Still, it will likely be a while until we know for sure. The synopsis for the next episode (airing April 19) doesn't say anything about Boomer:

"Beth decides to find a solution to her Rio problem once and for all after he backs her into a corner. Meanwhile, Ruby enlists Sara's reluctant help to replenish supplies after a key component of the women's counterfeiting operation dries up. Annie spirals after a particularly vulnerable session."

Beth seems convinced that Rio will kill Boomer in order to tie up loose ends, just like he did with Lucy. But if Rio really wanted Boomer dead, he could have arranged for that to happen a long time ago. As Annie and Ruby pointed out, Rio has a whole network of people in the prison system who could have killed Boomer there. Why go through the trouble of smuggling him out?