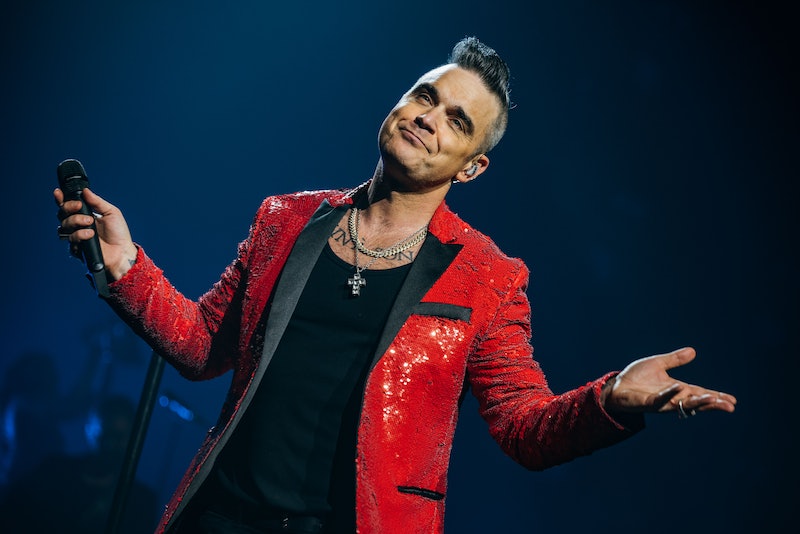 After a lengthy hiatus from solo music, Robbie Williams has burst back into the scene with his very own Christmas album. Following the release of brand new material and a string of successful television gigs, including a recent ITV festive spectacular, it appears appetite for all things Robbie is still going strong. But whats next for the "Let Me Entertain You" singer? And will Robbie Williams tour the UK in 2020?

Sadly, a 2020 UK tour doesn't appear to be in the pipeline for the "Angels" singer as of yet, and just to be certain, I have reached out to Williams' representatives for comment, and will update with any new information once it becomes available.

However, according to the singer's official website, Williams is set to perform a very special homecoming gig in June next year. The show will take place at Stoke's Vale Park Stadium on Saturday, June 20, and will be in aid of the Donna Louise Children’s Hospice Trust, Unicef UK and The Hubb Foundation. Speaking of the upcoming performance, Williams revealed that it "has always been an ambition" of his to perform at the Stadium, and said news of the concert "is like the best Christmas present of all."

Although Robbie fans might be disappointed by the hitmaker's current UK schedule, there are still plenty of opportunities to see the "Feel" singer live in the new year, although, you might need to plan a trip across the pond in order to do so. As the Metro reports, the former X Factor judge is set to embark on another Las Vegas residency, which will again take place at the Wynn Hotel throughout March and April 2020. The residency will consist of eight shows in total, and tickets are now available to purchase via Ticketmaster.

Williams recently dropped his festive double-album The Christmas Present, which includes a mixture of both classic covers and original tracks. The new album also boasts some impressive features, from the likes of Rod Stewart and Bryan Adams — and in addition to this latest venture, the "Rock DJ" singer will also provide the theme song for Channel 4's Christmas TV adaptation of the classic children's book, The Tiger Came To Tea.

So, despite no plans for a major tour, Williams certainly has a busy year ahead, and fingers crossed he makes his way back to the UK soon.