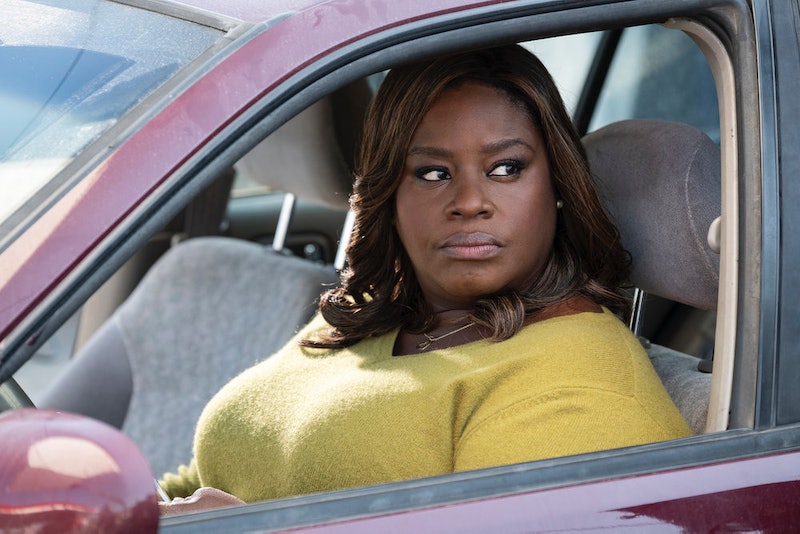 Family vs. friends. That's the debate Ruby's been having for a while now on Good Girls. But after the April 7 episode, it looks like Ruby might turn Beth in on Good Girls in order to protect her husband, Stan. In fact, she already almost did it once before: in the Season 2 premiere, Stan told her the FBI had Beth's DNA evidence and could link them to the crime. He advised that Ruby turn herself and her friends in, because the first to turn always gets the best deal. Ruby was all set to do so, she pulled into the police parking lot and everything, but that's when she got the idea to rob the evidence truck and steal Beth's DNA back.

Eventually, Stan had to be the one to steal Beth's DNA, wrapping him up in this whole situation too — something Ruby never wanted. So it was only a matter of time before Ruby cracked again, especially once the FBI turned their attention to her family. Mary Pat caved and told Agent Turner that one of the women was married to a cop, so Turner focused his energies on Stan, and by extension, Ruby. Turner even dropped by for "dinner" unexpectedly and cornered Ruby in the kitchen. "It'd be worse for him, you get that right?" Turner said about Stan. "The part that kills me is he just wants your son to look at him and see a good cop. So you let me know how you want to play it."

Ruby knows she has a great husband and a great family, and by the end of the episode, she wanted to put them first. She met with Turner and promised to tell him "whatever [they] need to know" as long as they keep Stan out of it. To her surprise, Turner promised that even Ruby would be fine, and they weren't arresting her. "What do you want then?" Ruby asked. "Her," Turner replied, clearly talking about Beth.

Beth has been the unofficial ringleader of the group for a while now. She's the one who got them back into the game when they were already out, and she's been upping the stakes every episode. Now she's not only washing Rio's counterfeit cash, but she's also entered into a drug smuggling/selling business with him, too. She's a big time deal to the FBI now, and they'll likely let Ruby off the hook if she can provide enough information to take Beth down. (It remains to be seen how Annie will fit into all this.)

Retta, who plays Ruby, previously hinted to the New York Post that Season 2 would feature "a big struggle between friendship and family," for her character. "Ruby's got to make a decision. It'll be cathartic — by the time we go through the season, you'll have some satisfaction," Retta said. Cathartic how? That's not quite clear. But while Ruby had previously expressed concerns about flipping on her friend ("Beth was my maid of honor," Ruby lamented to Stan), she may ultimately choose her real family over her chosen sisters. Stan and her children are innocent in all of this; Beth is not. And Ruby may just have to live with turning Beth in to protect her family.

But even if she does that, it sounds like things are going to get worse for her before they get better. Retta told TV Insider that pretty soon, her kids are going to start asking too many questions to ignore. "There's a scene with the whole family where the kids are like, 'What is happening?' And we can't hide it anymore," Retta said. Maybe that comes when Ruby has already turned on Beth and has to talk to the FBI or go to court? It's unclear, but in the battle between friends and family, it seems family could win out for Ruby — even at Beth's expense.

More like this
Sara Zwangobani Is A Self-Proclaimed 'LOTR' Super Fan
By Frances Stewart
24 Years Ago, 'Friends' Dropped Its Most Underrated Ross & Rachel Episode
By Grace Wehniainen
'Grey's Anatomy's New Intern Got Advice From Dr. Bailey Herself
By Grace Wehniainen
If 'Entergalactic' Season 2 Happens, You Could Get A New Kid Cudi Album
By Kadin Burnett
Get Even More From Bustle — Sign Up For The Newsletter