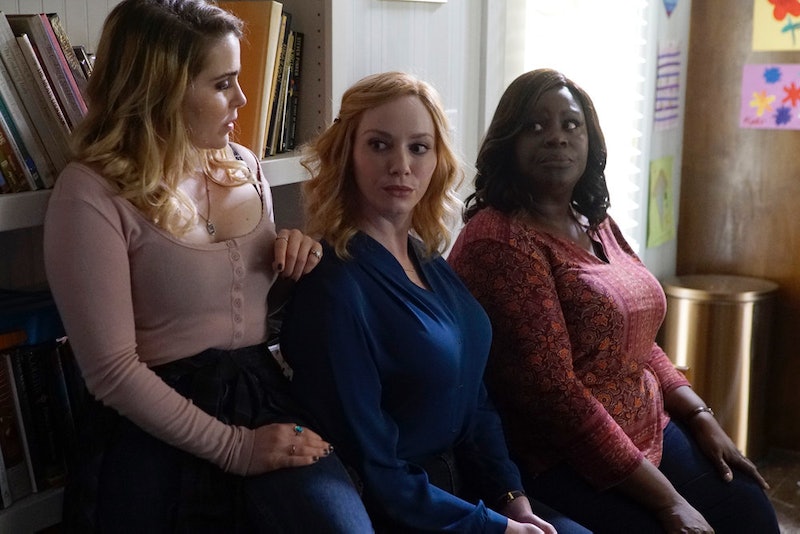 In the first episode of NBC's Good Girls, three middle class women rob a grocery store. Beth (Christina Hendricks), Ruby (Retta), and Annie (Mae Whitman) needed quick money to solve their problems, but of course it's never easy to contain the effects of a large-scale heist. Considering this is the story of a unlikely yet still believable crime, you may be wondering: Is Good Girls based on a true story?

The trio's reasons for getting the cash don't stem from greed or self-interest, but self-preservation. Beth needs to pay off a mortgage to provide a home for her children after her husband puts them millions of dollars in debt while having an affair. Ruby needs to find a way to cover a life-saving experimental treatment for her daughter. Annie works a dead-end grocery store job and needs to find enough money for a lawyer to maintain custody of her child. The grocery store robbery turns up major loot, as the women discover they've bagged even more money than they anticipated. But in the process, they've inadvertently stolen from a gang.

While the reasons that Beth, Ruby, and Annie got into a life of crime in the first place are relatable, the truth is that the show isn't based on a true story. However, creator Jenna Bans revealed to Bustle that the show's underlying themes came from a very real event — the 2016 election.

Bans described to Bustle a memory of her and her mother watching the news after the release of the Donald Trump Access Hollywood tape on which he proclaimed that had a free pass to grab women as he saw fit. "I sort of naively now, I realize, said to my mom, ‘Wow, I can’t believe the sexism in the media and everywhere in the election coverage, it’s so overt,’” Bans recalls. It was her mother's response that may have sown the seeds for Good Girls, when she asked Bans, "Where have you been?”

In an interview with Variety, Bans revealed that the show itself was "a love letter to my mother, who was really depressed and down about the way the election was going." Bans told Variety,

I remember my mom said something about the Hillary loss like, “It was just our time.” I started thinking about this idea that you spend your entire life following the rules and doing everything right and being a good person. And you have this expectation that life should work out for you and if it doesn’t, what do you do then?

The women of Good Girls may have started out as "good girls" at one time, but the series examines what happens women fight back against preconceived notions. Whether they're pushing against unkind doctors, cheating husbands, or inappropriately forward bosses, Good Girls suggests that the best way to fight the system is to step outside of it. Of course, once the trio realize that the money they stole from the grocery store is actually gang money, they're held under the thumb of a whole new group of people. What begins as needing to pay off debts may soon become a crime organization of their own if the women of Good Girls continue to succeed at breaking bad.

While the story of Beth, Ruby, and Annie was crafted for television, the roots of Good Girls come from a very real anger and confusion stemming from actual events. There are no criminals exactly like the trio of Good Girls, but there are people like them all around the world fed up with the injustice and mistreatment they're forced to face every day.