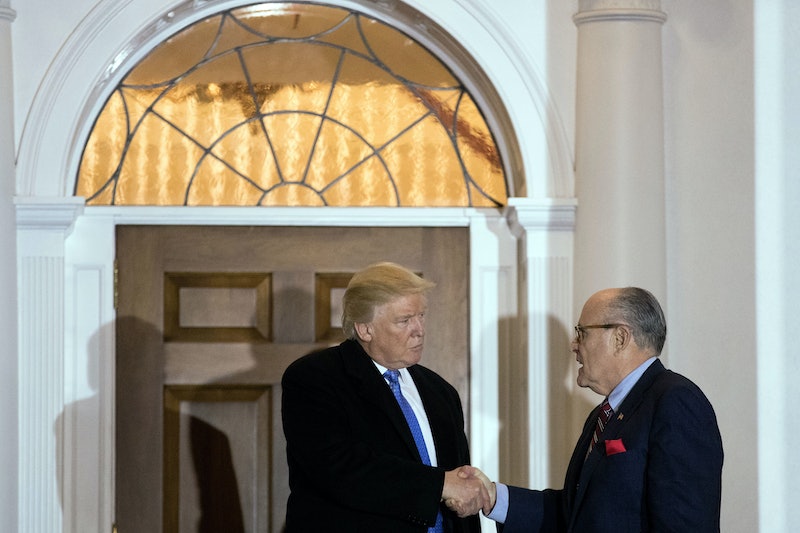 Now that President Trump has fired FBI director James Comey, it's natural that questions would come up about who the new FBI director will be. Nothing's been confirmed, but former New York City mayor Rudy Giuliani has stoked Comey replacement rumors by mentioning plans to visit the White House on Wednesday. New York Magazine reported that Giuliani claimed that he wasn't in the running for Comey's old position, but another source claimed otherwise.

Putting forward Giuliani as the potential new FBI director would make sense from Trump's perspective. This is a president who likes to surround himself with people loyal to him, and there are few well-known politicians who have been as loyal as Giuliani has. Giuliani started supporting Trump early on, and continued to vocally support him and try to silence his critics through scandal after scandal on the campaign — even after the "grab them by the pussy" episode, which sent many other Republicans running. Giuliani is currently serving Trump informally in a cybersecurity post, although it seems unclear to everyone what he's actually doing. He had earlier expressed interest in becoming the secretary of State, but backed off when it became clear that that wouldn't pan out. Floating him as an FBI director nominee could also make sense because of his background as a U.S. attorney, so Trump could spin things to say that he wasn't just rewarding Giuliani's loyalty.

Having Giuliani has FBI director, however, would be pretty much the worst-case scenario for anyone who wants the FBI to continue its investigation into potential collusion between Russia and the Trump campaign. Giuliani's support of Trump through everything on the campaign trail raises obvious questions about whether he'd be able to act impartially in this extremely important case.

The FBI director only needs to be confirmed by a simple majority in the Senate, so Giuliani would really only need to convince a couple of now-skeptical Republican senators that he'd be the right man for the job. So far, Senate Republicans have been supportive of even Trump's most questionable nominees, and Democrats would need three Republicans to vote down the eventual FBI director nominee. So far, no Cabinet nominee has drawn more than two Republican no votes, although five have reacted negatively toward Comey's firing.

As of right now, it must be emphasized that Giuliani has said that he won't be a candidate for the newly opened position, but he did also say that he supported the president's decision to fire Comey. The nomination is likely to come quickly, though, so at least on this front you probably won't have to wait very long to see which way Trump will go.