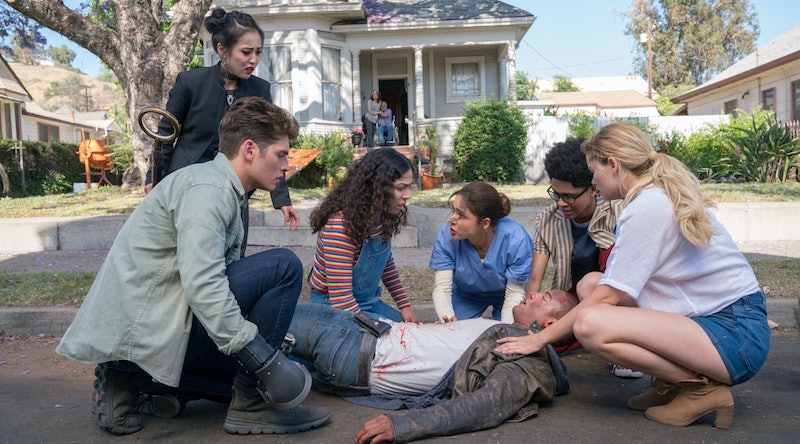 It’s been a rough time to be a Marvel television fan the past few months, given the recent cancellations over at Netflix. But luckily, there is some happy news to hang onto this week. In the wake of some high profile cancellations, Marvel’s Runaways returns to Hulu for its second season on Dec. 21. Though it’s unclear if Runaways will return for Season 3, these new episodes should be enough to tide fans over for now.

Update: Runaways has been renewed for Season 3, Decider reported.

Earlier: Runaways wasn’t renewed for a second season until Jan. 8, 2018, the day before its first season finale. So, the fact that there’s no word yet on Season 3 isn’t necessarily cause for worry — the powers that be are likely just waiting to analyze viewership numbers and reviews as new episodes roll out. All 13 episodes of Season 2 are premiering all at once on Hulu, according to ComicBook.com, so fans hopefully won’t have to wait long this time around.

A Runaways renewal would be welcome update for Marvel fans, especially after how tumultuous the last month or so has been with other series that exist under the franchise’s umbrella. Daredevil was canceled by Netflix in late November, just a couple weeks after the streaming service gave the axe to Iron Fist and Luke Cage, according to Deadline.

The same Deadline report hints that Daredevil might have another stint on the upcoming Disney streaming service, though there’s no official word. “While the series on Netflix has ended, the three existing seasons will remain on the service for years to come, while the Daredevil character will live on in future projects for Marvel,” Marvel said in a statement, per Deadline. According to the Ringer, the futures of Jessica Jones and The Punisher are also a little up in the air, with both ratings and subject matter making it hard to see a long future.

The stars of Runaways seem to have a comfortable home at Hulu, which bodes well for the show. “I haven’t heard anything other than total support from Hulu in regards to the show, which is nice especially because they go full out with everything that they do,” Ariela Barer told BriefTake.com “I think that they put most of their money into production, which you see in the final product… I watch everything on Hulu, basically, I range from The Handmaid’s Tale to Future Man, which is this very broad comedy. They’re not afraid of not being an award-winning platform, if they have a comedy or a superhero romance, and they’re not afraid to go fully into the award-winning drama that is The Handmaid’s Tale.”

According to the same ComicBook.com report linked above, the Hulu is launching an after-show related to Runaways, which will feature interviews with the stars and behind-the-scenes minds of the show. That at least shows that the network is putting a little more stake in Runaways’ success, and another ComicBook.com report, Marvel Television head Jeph Loeb hinted that the show could be involved in crossovers with another show, Cloak & Dagger.

All those clues suggest that Hulu wants Runaways to stick around for the long haul, but until Season 2’s success is evaluated, fans will just have to wait and see what happens.

More like this
All The Marvel Easter Eggs You May Have Missed In ‘Ms. Marvel’ So Far
By Kadin Burnett
The ‘Love, Victor’ Showrunner Gave Fans Hope For A Possible Spinoff
By Brad Witter
Here's Why You'll See Less Of Olivia Rodrigo In 'HSMTMTS' Season 3
By Bustle Editors
Everything To Know About The Flash Season 9
By Brad Witter
Get Even More From Bustle — Sign Up For The Newsletter