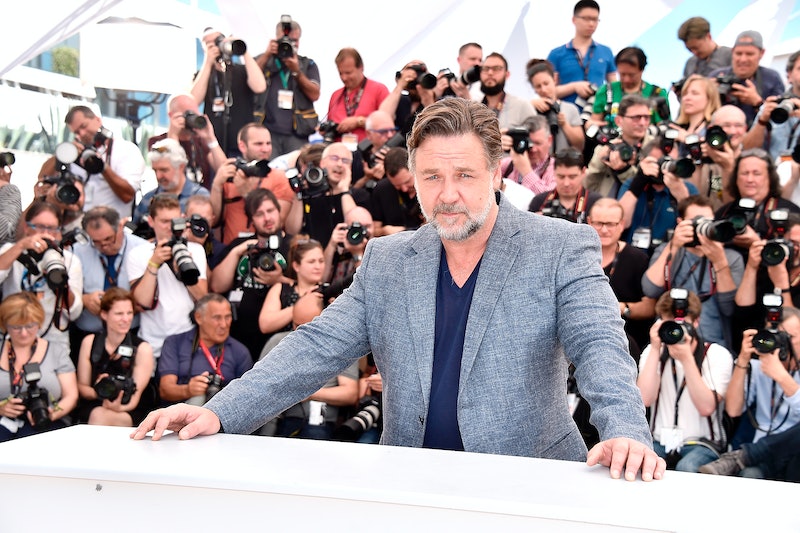 Viewers of Britain's Got Talent were in for a treat during the May 29 airing of the show, and not least because it was semi-final night. Those who were paying close attention may have spotted none other than Russell Crowe in the audience, alongside comedian Jimmy Carr, actress and singer Samantha Barks, and Crowe's very rugged new beard. Rumours are that the appearance wasn't just out of the blue, however, with many hinting the Gladiator actor was getting the lowdown on the TV favourite, and others asking will Russell Crowe judge Britain's Got Talent one day himself?

Though Crowe may not have been the first person you would think of when asked to compile your dream BGT judging panel, now that his name is in the hat, it doesn't seem that ridiculous at all. According to Digital Spy, Simon Cowell says the actor has approached him about being a judge on the Australian version of the talent show, which Crowe is a major fan of. Considering the Aussie show wasn't as popular as the UK version, leading to it being cancelled after just a few series, a big celebrity name being attached to the line-up just might be enough to bring the ratings back.

Crowe's appearance in the audience took many viewers by surprise, with few knowing about the Hollywood star's obsession with the show. Earlier, he had tweeted a clue that he may be making an appearance, asking his followers to guess where he was after sharing a photo of the Britain's Got Talent set. Twitter users were quick to spot what Crowe was hinting at, though. Nothing gets past Twitter.

After the show finished, current judge David Walliams shared a pic of himself with Crowe, Barks, Carr, and Crowe's unmissable beard. The latter proved extremely popular with BGT viewers, with many taking to Twitter to let the actor know just how great his new look is and others speculating if perhaps it has to do with a role he is preparing for during the summer.

According to the Digital Spy, talent tycoon Cowell wouldn't necessarily be averse to the idea of the Les Miserables actor joining the judging panel. The pair reportedly enjoyed dinner together, with Crowe hinting he would love to get a chance at critiquing the contestants on the Australian version of the show. Speaking to show presenter Stephen Mulhern, Cowell said, "He actually talked to me about being a judge on Australia's Got Talent." Would Cowell take his offer seriously? His reply — "what do you think?" — suggests he would.

Bringing such a worldwide star on board would catapult the ratings of Australia's Got Talent, which hasn't in the past gotten the same high figures as its UK counterpart. Having aired from just 2007 to 2013, it never made it to the status of must-watch TV in the same way as BGT. In 2016, the show was revived for an eighth season with Kelly Osbourne, Ian Dickson, Sophie Monk, and Eddie Perfect making up the judging panel. The ratings never made it back to the high points they reached in earlier seasons, with News.com.au reporting that the finale clocked up just over 900,000 viewers compared with a show high of just under three million in 2011.

Adding a fresh face to a familiar show could be the right direction for Cowell to head in if he wants to see the show back in the top of the ratings again. And what better duo than Russell Crowe and His Beard for the job. Let's hope Cowell snaps him up fast.