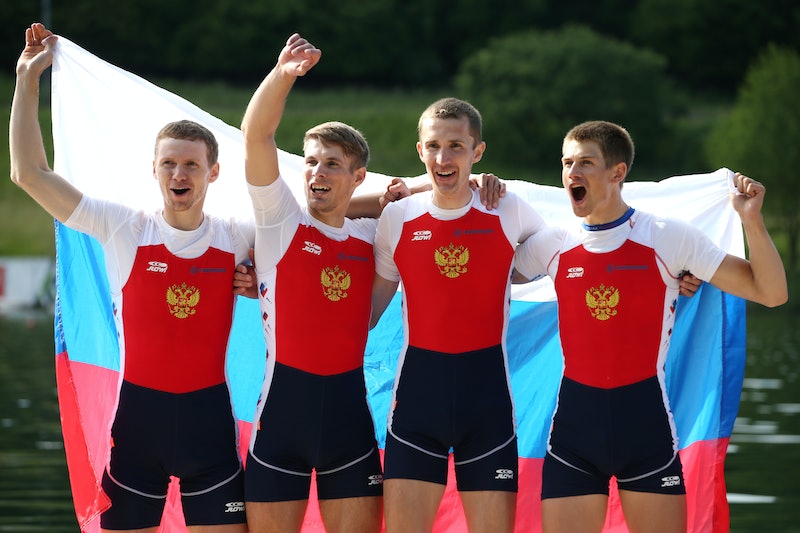 After the bombshell news that the country is banned from participating in the 2018 Winter Olympics in Pyeongchang, South Korea, many are wondering if Russia will be at the 2020 Summer Olympic Games in Tokyo. Following an investigation into doping in Russia's top-level athletics programs that dates back to the 2014 Olympics in Sochi, the International Olympic Committee (IOC) announced on Tuesday that no Russian athletes will be allowed to represent their country in the Winter Olympics. And things aren't looking good for the Summer Games, either.

One former employee of Russia's antidoping agency, Vitaly Stepanov, suggested in an affidavit submitted to the IOC this fall that Russia’s Olympic Committee be banned for at least two years, or until they can regulate anti-doping operations, the New York Times reported. “The world knows that hundreds of Olympic dreams have been stolen by the doping system in the country where I was born,” he wrote. “The evidence is clear, that the doping system in Russia has not yet been truly reformed."

Also according to the Times, it's almost certain Russia will not participate in the 2018 Paralympics, considering anti-doping regulators denied the appeals of Russia's sports minister, refusing to recognize the nation as compliant with the global anti-doping code. This doesn't bode well for the 2020 Summer Games, unless Russia completely cleans up its act in the next couple of years.

However, individual athletes may be able to compete, as they will at the 2018 Winer Olympics, only in neutral uniforms and under the Olympic flag. Some countries, like Germany, have already asked that Russia not be allowed to compete in the 2020 Tokyo summer Games because of state-run doping in the country. “There needs to a drastic correction of the course," Germany’s Olympic Committee chief Alfons Hoermann told die Welt newspaper in January. "Major sanctions are now needed, there is no doubt about that. There has to be a clear signal."

For individuals wishing to compete as neutral athletes, the International Association of Athletics Federation (IAAF) has laid out guidelines. Athletes are required to prove that they are not directly implicated in any way by their national federation's doping scandal. Athletes invited to participate in the 2018 Winter Olympics will be chosen by a panel chaired by Valerie Fourneyron, Chair of the Independent Testing Authority (ITA). According to the IOC, the panel will include members of Pre-Games Testing Task Force.

The IOC is also banning Russia's Minister of Sport, Vitaly Mutko, and his then Deputy Minister, Yuri Nagornykh, from all future Olympics. However, there might be a chance Russia can compete in the 2020 Summer Games, but the country will have to dismantle it's state-ran doping systems and ensure clean athletes are being properly protected and promoted. The nation would need to address “the systemic manipulation of the anti-doping rules," as Samuel Schmid, the former president of Switzerland, who led a commission investigating the doping allegations in Russia, put it.

“As an athlete myself, I am feeling very sorry for all the clean athletes from all (National Olympic Committees) who are suffering from this manipulation,” IOC President Thomas Bach said in a statement. “This decision should draw a line under this damaging episode and serve as a catalyst for a more effective and more robust anti-doping system led by WADA (World Anti-Doping Agency).”

The IOC announced their decision to ban Russia from the 2018 Olympics after top officials met privately with Alexander Zhukov, the president of Russia’s Olympic Committee, according to the Times. Also present was Vitaly Smirnov, Russia’s former sports minister who previously appointed by President Vladimir Putin to lead a national antidoping commission, and Evgenia Medvedeva, a two-time world skating champion. “Everyone is talking about how to punish Russia, but no one is talking about how to help Russia,” Smirnov said during the meeting. “Of course we want our athletes there, and we want the Russian flag and anthem."

While the Russian flag and anthem will be absent from the Opening Ceremony at the 2018 competition, "IOC may partially or fully lift the suspension of the ROC from the commencement of the Closing Ceremony of the Olympic Winter Games PyeongChang 2018," according to the organization, "provided these decisions," including banning Mutko and Nagornykh and reimbursing the IOC for the investigation, "are fully respected and implemented by the ROC and by the invited athletes and officials."